Hello kids! It’s that time of week again when we all give big ups to this week’s Comment Of The Week!

“RMMD: Why do the children in this strip age so tragically early? Why are they deprived of normal childhoods with normal necks and normal hairstyles?” –Poteet

And the hilarity didn’t stop there:

“I can’t help but feel that Bil Keane lost a bet against a creepy middle-aged furry-loving pedophile and this cartoon was his side of the bargain.” –Zach

“Like his namesake, Peter Parker gained the ability to revolt and terrify women. His one weakness: brooms.” –paddywhack

“Speaking of Spider-Man, you have to at least give them credit for making sure a page where absolutely nothing happens is done in the most dramatic camera angles possible.” –Foolster41

“The Meddling Interloper is calling Clark Gable her ‘client,’ implying a financial transaction is required for her advice. Mary gives it away for free, so there’s no way to Ella can compete with that. It’s like trying to start a brothel next to a sorority house.” –yellojkt

“Injured in a freak meth lab accident, May has the comparative ferocity, inhuman strength, and incoherence of a tweaker. She can also cling to mullets.” –Marion Delgado

“Holy crap, my hate for Michael just gets deeper and deeper. ‘He was our mascot, our anti-hero, our futility symbol.’ Mike, you don’t need a futility symbol. Your life pretty much qualifies as being futile for real.” –Tak, the Hideous New Girl

“Sadly, I mistook the Judge Parker strip for Spider-Man. I saw the word ‘Parker’ and whoops! I mean, with no supervillains, no sight of the Spider-Man costume, meandering dialogue, goofy background characters, and a ‘this comic strip tackles serious modern issues’ brooding countenance on the square-jawed blue-hair in the last panel — well, I’m sure you can see why I made the mistake.” –Benicillin

“How awesome would it be to expose the Keane family as creepy perverts? (Answer: really awesome.)” –Chromium

“Now that the Ghost-Who-Walks killed the Doorman with an inspired game of hide-and-seek, it boggles the mind to think of how he’s going to kill the rest of the criminal network he apparently discovered by looking at the Doorman’s MySpace friend list. My bet is on either peek-a-boo or ‘got your nose.'” –reader-who-posts

“Dewey would do well to end his tirade quickly, now that he’s embarrassed himself with a demonstration of how hilariously impossible it is to throw paper in a fit of rage.” –Rhekarid

“Once again, They’ll Do It Every Time is a lot more like They’ll Do It Occasionally, If They’re In A Highly Specialized Field And Random Chance Conspires To Make Something Happen.” –jess a.

“Let that be a lesson to all you failed presidential candidates out there seeking advice in Charterstone from questionable women. I’m talking to you, Gary Hart.” –bitter law student

“There is no way that Molly would eat Theodore Beaver. She eats sunshine and cotton candy!” –Gal Friday

“Clearly, the folks in Phantom chose their president for his magnificent thighs specifically, and his ability to look great in a lycra tuxedo, generally. See? This is what you get when you vote for things you believe in instead of against things you don’t believe in. I’m talking to you, America. –Summerhouse

Also! This weekend I received a pair of charming photos from faithful reader MossMoses, formerly known as Sassy_Rocks. As a big Mark Trail fan, MossMoses was of course charmed by our Molly the Bear t-shirt. Here, he expresses a Molly-esque love for all things despite the incomprehensible hostility of an off-camera antagonist: 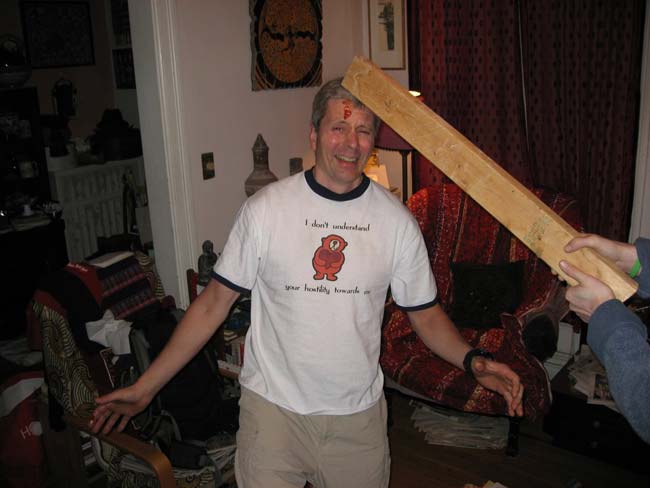 And here he contemplates the hostility of what I’m pretty sure is our bobbleheaded Commander-In-Chief for his commie hat: 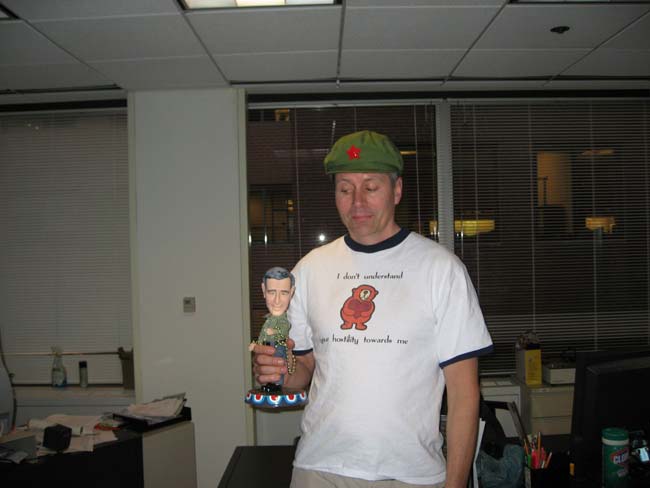 And speaking of rampant commercialism, we must give our weekly thanks to those who have helped pay the bills by buying adspace.

Click here to find out more about advertising on this site.