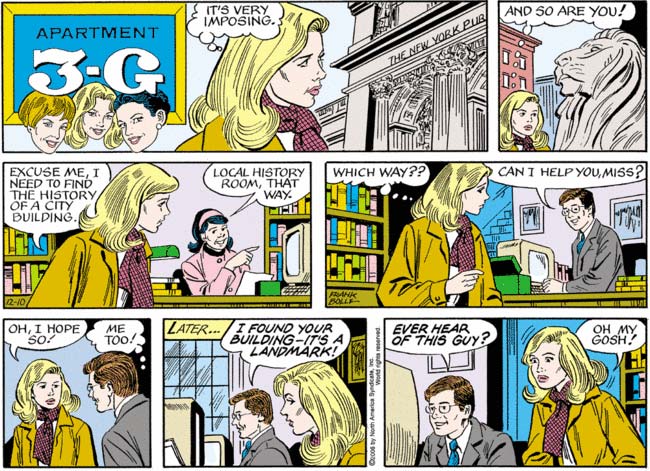 In an attempt to recapture the magic of one of the greatest Apartment 3-Gs in recent memory, Lu Ann is taking a magical trip to the world-renowned New York City public library. She’s looking for knowledge, but she’s sadly found only another romantic interest, albeit one who, with his reddish hair, glasses, and marginally softer features, is distinguishable from the classic boring A3G male type. Our bookworm is so deeply and erotically charged by Lu Ann’s mere presence that, in order to win her attention and affections, he’s transgressing the ultimate librarian taboo and actually shouting in the library. 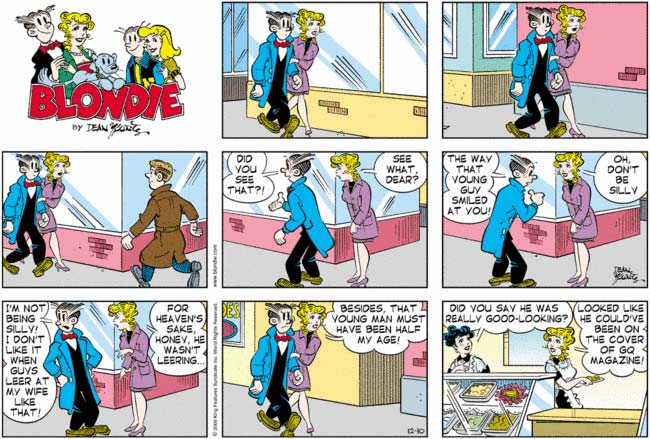 I’m going to pass over the little drama of burning jealousy and suppressed lust that makes up the supposedly innocent humor of this strip today and just point out that the two throwaway panels at the top — which aren’t used in some layouts and thus need to be removable — are the biggest “fuck you” to the very concept of throwaway panels I’ve ever seen. Since their expressions are unchanged in all three, I can only assume that our young hunk was leering at Blondie, and Dagwood was raging inwardly, and Blondie was feeling genuine sexual arousal for the first time in years, for the entire time it took for them to walk the length of a city block. 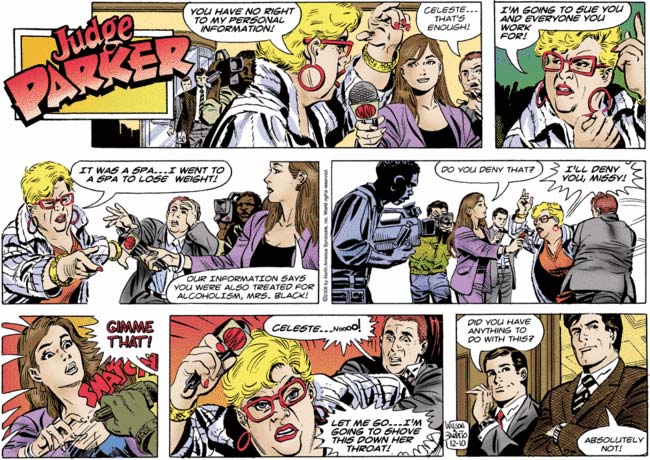 I don’t mean to be a killjoy. I certainly wouldn’t want to deny us, the long-suffering readers of Judge Parker, the genuine pleasure to be had in Celeste Black’s spectacular drunken meltdown, or in Reggie’s ineffectual response. I’m not sure if I’m willing to forgive Sam and Randy’s smug satisfaction, however. After all, having an insane lush for a wife shouldn’t disqualify one for the bench per se; neither of course, should bachelorhood and/or homosexuality, which is why Reggie has clearly brought this upon himself. But there’s still a little thing called HIPAA that’s there for a reason. My prediction is that we’re going to find out that Horace is working as some kind of freelance ultra-low-rent Karl Rove and leaked this information to the press, and that Randy, distancing himself from old-time machine politics, will have to Do The Right Thing and sever ties with his old family friend, possibly by having his CIA agent girlfriend murder him in his sleep.

(For those keeping track, incidentally, this Sunday strip is the work of the temporarily unavailable Eduardo Baretto, as Sundays need to be prepared a few weeks in advance of the weeklies.) 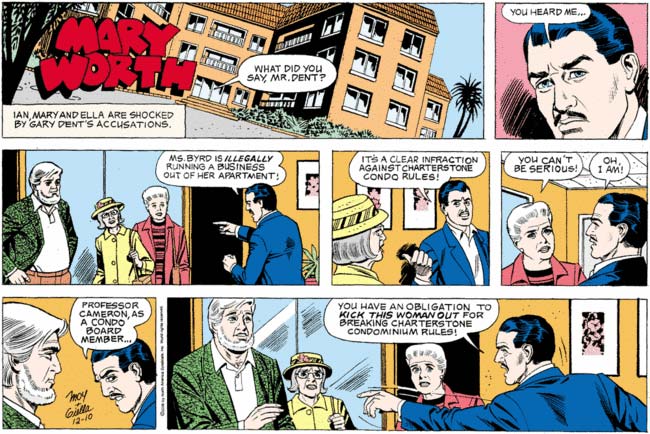 You know, we all got very jazzed up about Mary during the glory and excitement that was Aldomania. But this strip reminds us what Mary Worth is and truly ought to be all about: relentless petty outrage over stupid, meaningless things. That and pointing. Lots and lots of vigorous pointing. I love Mary’s look of surprise in the final panel, and Ella’s attempt to put on her “Who me? I’m a harmless old lady! Ha ha!” face. Ian, resplendent as always in his Astroturf jacket, is unimpressed by Dent’s j’accuse: he seems to be thinking, “Look buddy, last month I was an accomplice to murder, and condo board power plays do not impress me any more.”

Fun game for the coming months: In how many upcoming Mary Worth installments will we be able to construe Gary Dent’s rambling diatribes as accusations that Ella is a prostitute? 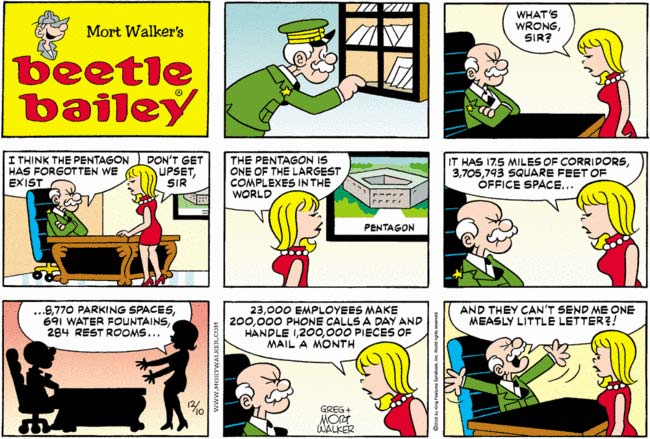 This installment of “How to turn a public domain Department of Defense informational pamphlet about the Pentagon into a comic strip and still make your 1 p.m. tee time” has been brought to you by Beetle Bailey.