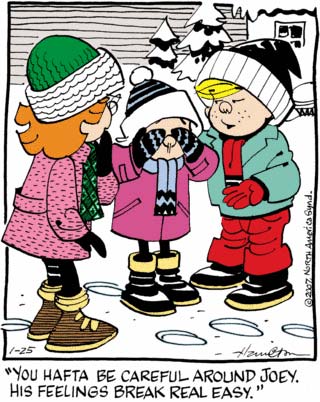 I’ve remarked earlier that Joey’s main purpose in life seems to be to make Dennis look like a bad-ass by comparison; as Dennis has grown increasingly cuddlier, so Joey is forced to become ever more innocuous. It seems that his level of friendly harmlessness has reached a point that is dangerous to his physical and emotional health. I’m not sure if Joey is supposed to be weeping openly because of some perceived slight from one of his thicker-skinned friends, or if he’s just covering his eyes in a sad and desperate attempt to cut off all external stimuli (because if he can’t perceive the actions of others, he can’t have his feelings hurt!), but I’m worried about the guy.

Speaking of breaking easy, those freakishly thin bird-like legs look like they’d snap like twigs if you looked at them wrong. Or maybe his legs are long gone and those are second-rate prostheses made from broom handles.

There’s nothing particularly exciting or ground-breaking about today’s Gil Thorp, but it seem to really exude the vibe that makes me love it so. There’s ex-hobo Ted Pearse in his groovy thrift-store vintage shirt; there’s the weirdo taunt that no teenager would ever utter, ever; there’s the slow-burn reaction to same on the part of the one of the dimmer characters; there’s the typical use of “the Bucket” as part of a barely veiled sexual euphemism; and there’s lots of very oddly drawn hair and foreheads. Pure bliss.

Oh, hell no. Bucky’s innocent and wholly accidental marijuana legalization campaign gets censored across the country, and this filth gets a pass? There ain’t no justice.