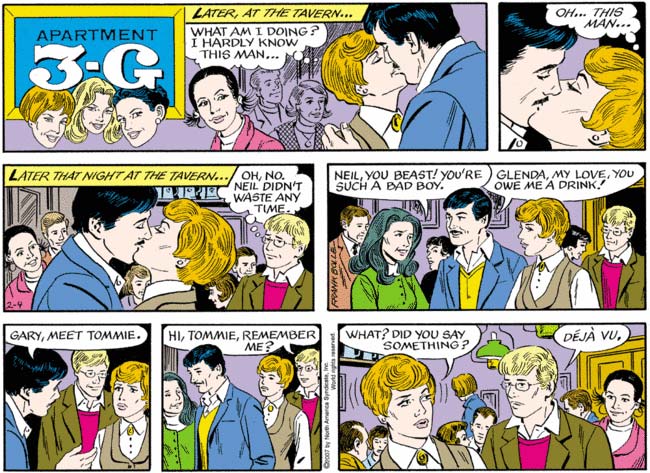 So I just spent a good chunk of time catching up on the various comics I missed while I was away, and I have to say that nothing was so disturbing as the bizarre turn of events in Apartment 3-G that saw Tommie falling into the arms of a pencil-mustached lothario out of the 1970s 1950s 1890s [Note: Historical records confirm that there has been no decade in recorded human history in which Neil’s clothes, haircut, and mustache would be considered fashionable and attractive. –Eds] Less traumatizing than Neil, who will soon cast aside Tommie like a used tissue, is Gary, aka “Boy Tommie.” Clearly this lookalike duo is destined for romance, at which point all of time and space will collapse into a black hole of bland mopiness from which nothing, not even fun, can escape.

I really thought for a minute that Tommie was supposed to be wearing a bolo tie, but it turns out that it’s just a Victorian locket or something. Still, she is looking rather Old Western, and not in a good way.

Before I conclude, I do want to cast a look back at a couple of gems from last week. I certainly don’t mean this as a disparagement of Uncle Lumpy’s fine job filling in, but it’s just that he doesn’t necessarily share all of my incomprehensible comics obsessions, one of which is old people having sex. 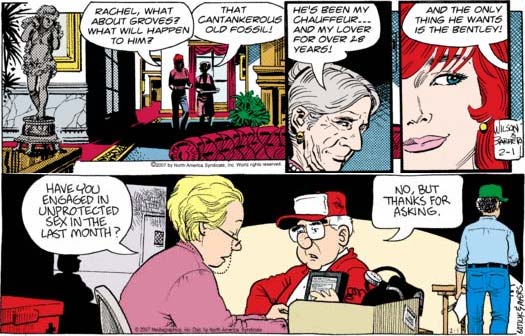 It was too slow-moving and pointless to cover here, but I always thought there was something a little odd in the interaction between Rachel and her regular butler (who now seems to be locked in his sickroom, totally forgotten) in the weeks leading up to Abbey and Neddy’s arrival in Paris. I don’t even want to know about the twisted power dynamics that go on in a sexual relationship between an old gazillionare biddy and her manservant. I do know that I love Rachel’s expression in panel two. It says, “Yeah, that’s right, you sexy young mulleted whippersnapper, I’m eighty years old and dying of cancer, but I’ve been gettin’ me some hot servant tail for decades, while you can’t even bed your own husband by wearing something low-cut and getting him boozed up!”

Crankshaft’s face, meanwhile, bears the ashen expression of a lonely widower who is suddenly reminded that he hasn’t felt the intimate touch of another human being in decades. That’s Crankshaft for you, which mainly serves to provide comic relief for Funky Winkerbean.

Finally, yesterday’s Watch Your Head had an amusing take on Curtis.