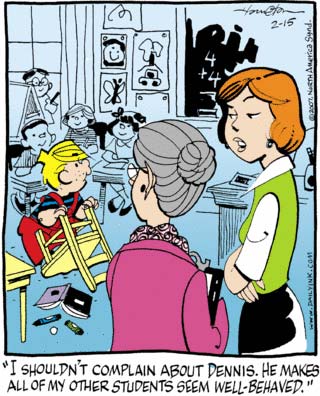 Can anyone explain to me what Dennis is supposed to be doing in this panel? Is he riding his chair like a horsey? Is that it? That doesn’t seem menacing so much as insane. If he were swinging the chair around at the heads of the other children, that would be menacing.

I note that Dennis’ chair does not have a little desk attachment like the other children’s. Perhaps he ripped it off and flung at someone. That’d be menacing, though apparently The Man doesn’t want to show it to us.

“Yeah, I did a lot of foolish things back then! Like take advantage of the opportunities afforded by my military service to learn an exciting and interesting trade that would allow me to get high-paying jobs in civilian life!”

Does Sally ever get to decide things for herself? Dan may have released his death grip on her upper arms, but it looks like he’s got a hold that’s just as strong on her soul. It may be that his raw sexual charisma has her under his spell — check out those pecs in panel two! That is one well-fitted turtleneck.

If it turns out that it never occurred to Abbey and Neddy that a French art school might conduct its classes in French, I will be very, very happy. “But … but … I bought a beret! I can’t believe you expect me to do more to fit in!”