Another day, another insanely dementedly wonderful Slylock Fox. While it’s usually the visuals that wow me in this strip, I have to admit that what I most love here is the phrase “transfer the brilliant mind of Slylock Fox to the soft innards of a ripe eggplant.” Not that the visuals aren’t awesome, of course: you’ve got Slylock’s usual sang-froid cracking just a little as he contemplates the purple prison that will soon entrap his very soul; you’ve got Max Mouse hiding out in what appears to be a mouse-sized coffin; you’ve got the slavering vulture, no doubt giddy in anticipation of feasting on Slylock’s empty husk; and, most poignantly, you’ve got the earlier results of the same fiendish procedure, languishing in a jar and, in what seems to me to be an insult added to injury, submerged in water.

Another sad example of the problems with working backwards from the punchline. Clearly this “joke” was thought up in advance, and the “healthcare plan” was shoehorned in later as a generic phrase that stands in for “Senator stuff.” Because honestly, while healthcare policy can cause a great deal of heated political debate, the only way his healthcare plan would actually cause havoc and pandemonium would be if it could boiled down to “free amphetamines for everybody.” 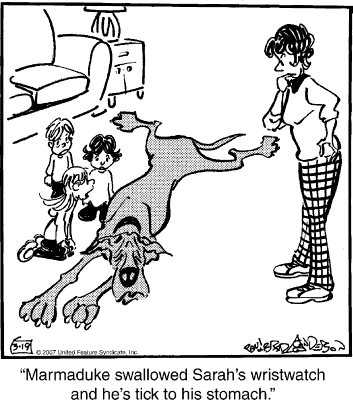 Ha ha! Marmaduke ate something that wasn’t edible, and now can’t pass it through his digestive tract! He’s ill and might die! Ha ha!

Normally I hate cartoons that depict animals in pain, but I might be willing to make an exception for Marmaduke.

Is it wrong of me want something terrible to happen to this child, whom Crankshaft is apparently throwing off of his bus onto the side of the road in the middle of nowhere? Perhaps if he gets kidnapped, just for a little while, before being found (unharmed, of course) in the trailer of some drifter on the outskirts of town, then Crankshaft will finally be seen as the monster that he is, with the ensuing media circus forcing him to leave town along with his resentful family.

Normally you get bumped off of an airplane because it’s full. By kicking this kid off of what appears to be an empty bus, Crankshaft earns extra asshole points. Not that he needs them.