All right, Marvin, listen to me: “like that popular toy” isn’t something that any human being would ever in a gazillion years say. An actual human being would say “like Dancin’ Elmo” (and substitute the actual brand name of whatever animatronic Taiwanese-manufactured hunk of plush crap is being demanded by all the little squallers this year for “Dancin’ Elmo”). The only situation in which you’d say “like that popular toy” is if you had a law firm on retainer that was terrified of angering some major toy manufacturing concern vetting your dialogue before you speak it.

Of course, these are all Marvin’s thought balloons, and I suppose that we don’t really know how pre-vocal infants think, so it’s possible that their internal narrative sounds like it was composed by a committee of overcautious corporate lawyers. But I kind of doubt it.

By the way, Floppet, if the way I’m interpreting that last panel is correct, as soon as Marvin starts walking around and shaking his diapered butt vaguely in time to the Barney song, you’ll be finding yourself in a box at the Salvation Army in short order.

I find it charming that Ezekiel’s mom looks so horrified that her son is apparently making the essentially arbitrary choice of underwear style by a somewhat whimsical method. Presumably, if she knew the truth — that Ezekiel had gone through some horribly misguided career-selection algorithm that boiled things down to two possible life paths, one of which involving hundreds of thousands of dollars in education expenses for her, the other involving her son being repeatedly punched in the head until he’s left a near vegetable at the age of thirty, and that he’s using random chance to determine which road to take — she’d be totally fine with it. 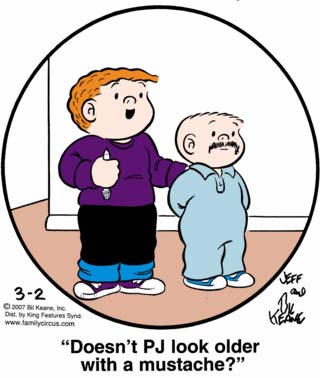