OK, yesterday’s zany talking rug was obviously just the lead-in to the full-on peyote-drenched nightmare that is … this. Sometimes people say things in the comments before I read a strip and I think, “Oh, they’re exaggerating” but … that potato in the first panel is talking. It. Is. Talking. It … JESUS AND SHE’S GOING TO PUT A KNIFE RIGHT THROUGH IT! Panel two is obviously a “world as perceived by Cherry’s drug-addled mind” view: the reason her skull is so unnaturally bulbous is because it’s full of people who talk and argue without her opening her mouth; the look of sheer panic and disgust on her face indicates that she’s ready to crack her own head open just to MAKE IT STOP MAKE IT STOP FOR GOD’S SAKE MAKE IT STOP. The rather pedestrian scene of a giant bear ratiocinating in the final panel is prosaic and calming by comparison to the horror that came before.

Comprende? Comprende? OK, seriously, now they’re just fucking with us. Someone has ordered the dialogue in Judge Parker to be translated into “foreign.” 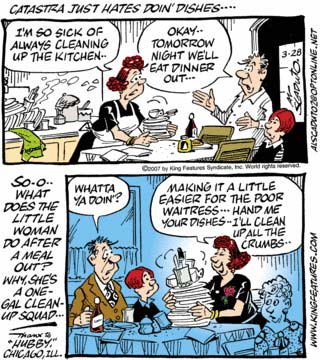 NOTE TO ALL PERSONS NOT LIVING IN YEARS PREVIOUS TO 1965: When your spouse or partner says, “I’m so sick of doing chore X,” the correct answer is, “I’ll do chore X tonight.” OH YEAH!

I can particularly see why Catastra might be so tired of doing dishes, since it seems that this family of three has managed to dirty dozens of them in the course of a single meal.