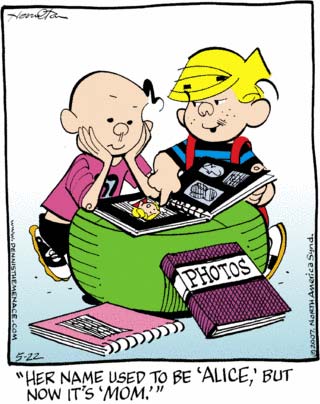 Dennis the Menace rightly gets flack on this site for his repeated failure to menace anybody, and today’s installment, in which he and his pal Joey take a whimsical trip down memory lane on the family footstool, would seem to be even less menacing than most. But think about it: Dennis is well aware of the fact that Alice, who used to have a name, and, moreover, an identity of her own, has now, by the very fact of his whelping, become merely an adjunct to his own larger-than-life personality. She’s no longer Alice Mitchell, and she’s definitely not Alice Whatever-Her-Maiden-Name-Was; she’s just “mom,” and, more to the point, she’s mom to the most hated child in the county. And Dennis looks pretty damn smug about this state of affairs. That sound you hear is millions of women across the country opening the cases that hold their birth control pills, double-checking to make sure they haven’t missed a day.

I like the fact that Hi is not charmed by his twins’ antics, but rather stares at their handiwork in goggle-eyed panic. The lawn is shaggy enough that he can’t really care that much about the damage to the landscaping; rather, he sees that his golf dates, which were his only chance to get away from his hated family, will now be replaced by sullen putting around his backyard to delight of his squealing kids, followed by his suicide.

Today we learn that the characters in Crock are in fact parasites who live their days wandering around the bright yellow flesh of some unimaginably huge being. If you had told me that somehow they’d find a way to make this strip even more unsettling than it already is, I wouldn’t have believed you, but there it is.