OK, everybody, at long last: the complete list of Self-Clubbing Tyler Lookalike Contest entrants! Let’s start by taking a look at the glorious panel itself in all its glorious glory:

And now, to refresh your memory, the entries you’ve already seen. The first is from a reader who likes to be known as Dr. Jeff Corey. He sent several variations on his picture; this is the one I liked best. 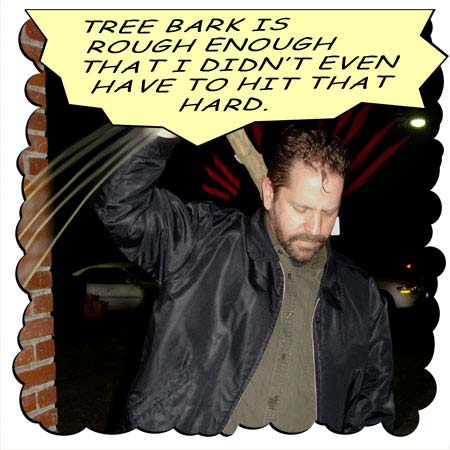 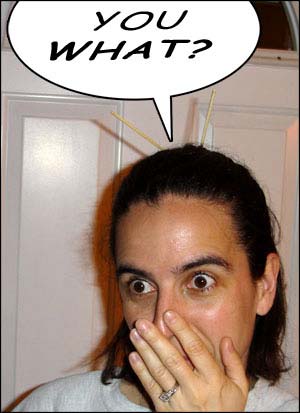 (You might remember Lucy as the winner of the Finger Quotin’ Margo contest. This is one family that just can’t get enough of the comics character imitatin’!)

But back to Tyler. Next up is faithful reader Harold. “I think a few neighbors are probably wondering why I had my 10-year-old nephew taking pictures of me whacking myself in the head with an oak tree branch,” he says. 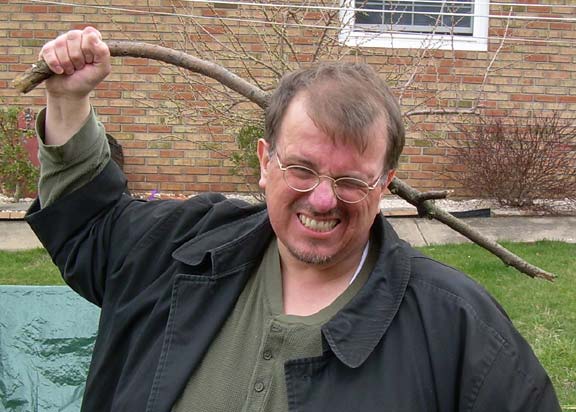 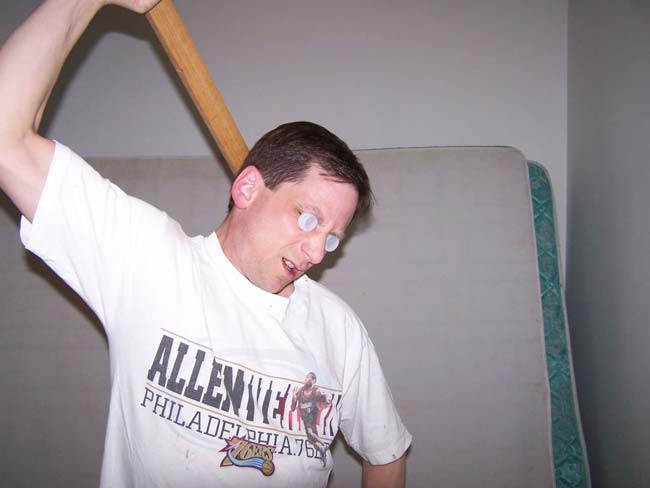 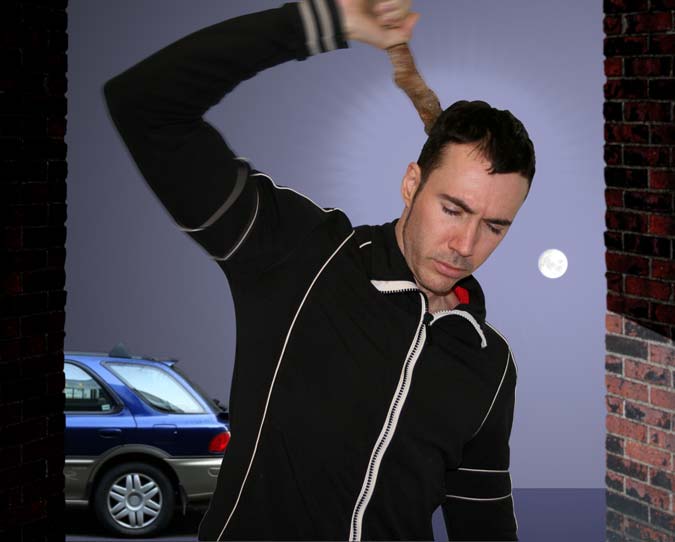 And finally, here’s faithful reader Lee’s entry. “That orb is actually a basketball, a really dirty basketball,” he notes. 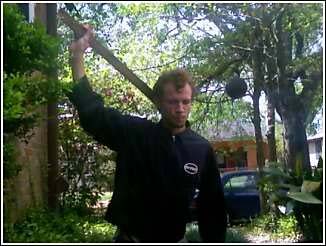 This bunch was indeed righteous and awesome, and it inspired a host of new entrants, who are you seeing now for the first time!

Let’s start with faithful reader TurtleBoy. “It ain’t much for accuracy, but I like the mathematical formulas in the background,” he says. (Does anyone in Milford actually understand math, other than Brick House?) 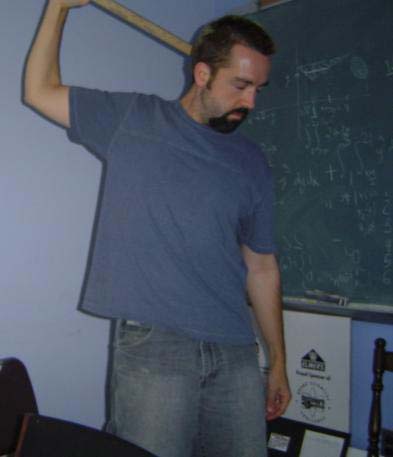 This one arrived without comment through my smoldering modem: 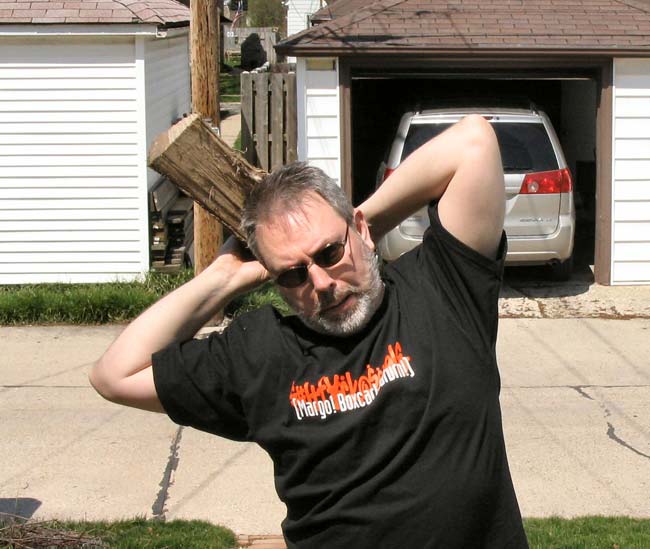 Here’s one from self-described “mostly lurker” hypochrismutreefuzz. I’m curious about what appears to be a cage apparatus in the background. 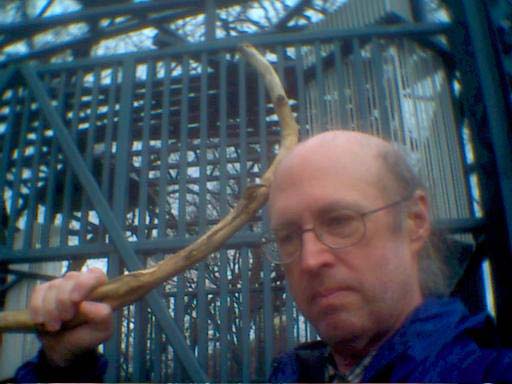 John B. used the power of PhotoShop for his entry (at least I hope so). “Please note the highly accurate hair curl,” he says. 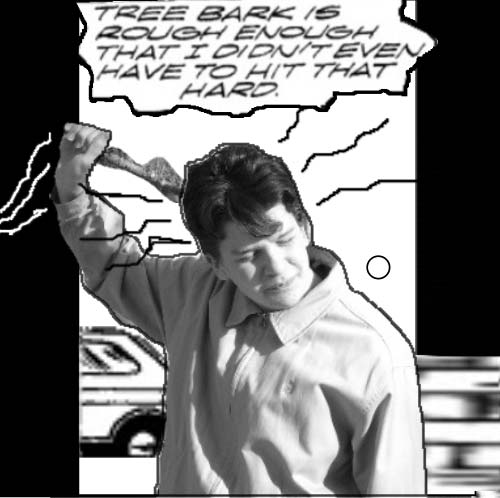 I reproduce for you here the entirety of the note that accompanied this pic from faithful reader Wally Lamb:

I won this contest fair and square. I didn’t do anything wrong. I never filed a police report. I never accused anyone. Everyone thinks I’m stupid, even Brynna. But I got one over on all of you! 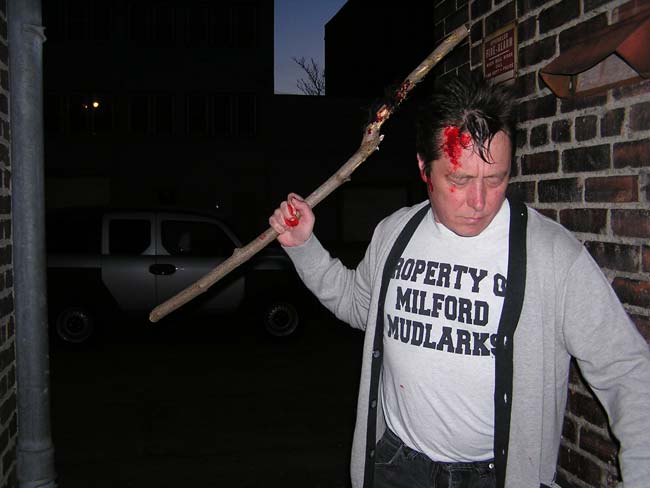 And finally, here’s faithful reader Spotted HØrse. He’d like to assure you that photographic trickery, and not Mother Nature’s cruelty, is responsible for the shape of his noggin in this photo. 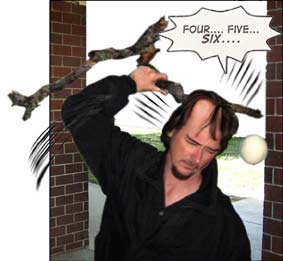 The inimitable and awesome Dean Booth, you may recall, has created a Self-Clubbing Tyler Action Figure, which is going to serve as the prize for this here contest! Here he is in mint condition in his original packaging:

And this is what the playset looks like when you get it all put together: 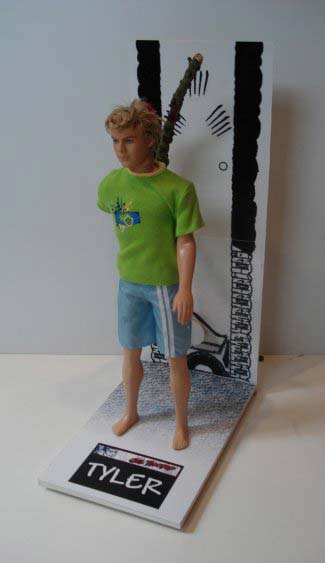 And, oh yeah, did we mention that it has mechanical parts that really work? You’d better believe it, buddy!

Still more pics are available on Dean’s Web page, including a good one of the back of the action figure’s bloody head. Anyway, it’s going to be excruciatingly difficult for me to figure out who deserves this most, so look for me to take another week of farting around to do it. Meanwhile, debate the merits of the entrants in the comments on this post! You may sway me! You may not! But you’ll enjoy it!