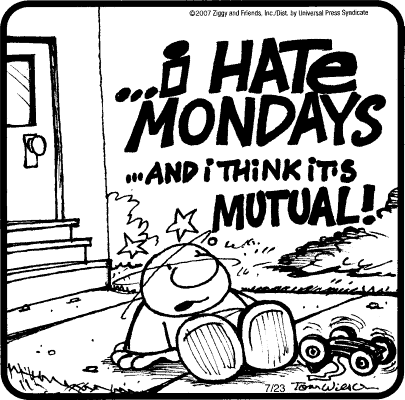 I’m with you, Garfield Ziggy! Those Mondays’ll get ya down! If there’s one thing we can count on from Garfield Ziggy, it’s burning hatred of Mondays. But people really do hate Mondays, which I guess is why Garfield Ziggy sells so many darn mugs and posters!

Anyway, Garfield Ziggy is certainly right today: all of the comics just left me cold for the most part. Even this shameless out-of-context Mary Worth double-entendre couldn’t shake me out of my Monday funk: 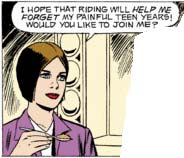 She’s going riding whether you’re coming or not, Dr. Drew, so why not get on board?

No, the only thing that really made me smile today was Mark Trail.

Sam is nothing if not a method actress, a necessity for the sort of half-cocked, half-concealed-by-shrubbery skullduggery she’s engaged in here. Unfortunately, her normal face features the sort of freakishly wide eyes that you normally only see on drug addicts and Graves ophthalmopathy sufferers, so the only way she can show her “frightened while looking for her dog” face is to present the bug-eyed horror show we seen in panel three. Hopefully everyone’s mom is right and her face is going to freeze like that, because that will make for the most awesomely disturbing next three to eight weeks of Mark Trail ever.