My mom is retiring in the fall after thirty years as a teacher, and I have to imagine that, if one of her erstwhile students had shown up on a hot day in July and said, “Hey, remember me, the kid who accidentally chopped off his own leg with a chainsaw last fall? Could I hang around the school this summer and maybe you can teach me stuff? My dad will buy you supplies!”, her reaction would be — well, not rude, since she’s not a rude person, but firm, and negative. In fact, she didn’t spend her summers hanging around the school at all, possibly to avoid just such an awkward confrontation, though more likely because she has a life, unlike Gil Thorp, apparently.

I’m pleased to see that Coach Kaz has chosen to take time out from his exciting summer to brave the horrifying stench that lingers in Milford High’s gym and hang out with this cavalcade of losers. Mostly I’m hoping that he’s going to teach Bill Ritter that if you believe in yourself enough, you can punch a dude right in the hypothalamus no matter how many legs you have. But Coach Thorp is lucky to have someone else around right now, too, because he’s obviously rapidly deflating. In panel two, he and Coach Kaz both look like ’roided out He-Man extras, threatening to burst right out of those cotton t-shirts with their manly chesteses. But in panel three, slouchy, scrawny Gil looks more like the guy from the famous Charles Atlas sand-kicked-in-his-face ads before dynamic tension worked its magic. Even his flattop is kind of droopy.

Good God, what kind of world do we live in where the action in Gil Thorp stays with the same two characters in the same room for three consecutive panels, while the Mary Worth chronology leaps forward “several weeks” willy-nilly? I suppose we’re going to find out that Dawn has been sneaking off to the horse stables to “ride” with Drew for the past few weeks under the pretext of studying. Since it makes absolutely no sense to conceal this fact from her father, we’re just going to have to accept that “horseback riding” in Mary Worth should always be understood to mean “illicit sex.”

Do you ever get the feeling that a cartoon is drawn by someone who’s working off of a script and who almost, but not quite, speaks English? Our random brunette says “I love mysteries!”, but with the little hearts floating over her head and the way she flings her body halfway up the counter, it seems more like she should be saying “I love your hot body!” or “I love crystal meth!” Because this is Shoe, the Perfesser manages to kill this puzzling but genuine enthusiasm with a terrible joke. 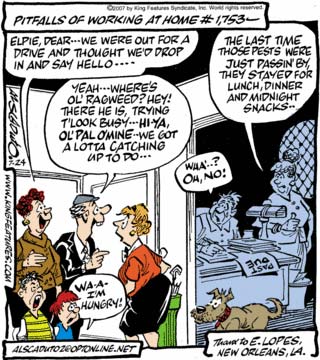 As a work-at-home type, I can tell you that this is a pitfall of the home office lifestyle. That’s why I refuse to answer the phone or the doorbell, and frequently insist that my wife lie about my whereabouts as I labor feverishly in my office with the door barricaded. What puzzles me about the scenario depicted here, though, is the presence of two adult women in the Ragweed household. Is this some weird amalgamation of the modern world of the home office and the TDIET 1950s sensibility, where every male white-collar worker has a female secretary? Or is Ragweed a polygamist as well a freelancer?