Got a note from faithful reader willethompson the other day with this charming photo: 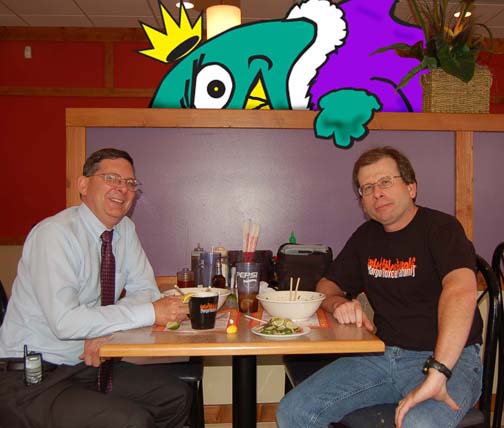 Awhile back, gh came up to my neck of the Carolinas to pick up his M!B!S! mug and we made a lunch of it. Dingo had been waxing eloquently about pho for a bit, so we arranged the pickup to take place at Saigon Garden, a shockingly good Vietnamese restaurant in Conover, NC. The bowls you see are the remains of two #47s, fish and roast pork with egg noodles.

By a weird coincidence, the Galactic Emperor Chennux was just on the other side of the restaurant enjoying a #15 Bun Saigon (he’s a sucker for fish sauce on cucumbers, or so Yom tells me). He seemed cranky, so we didn’t ask for autographs, although afterward we found the word ‘CHENNUX’ magmacannoned into the parking lot next to Greg’s car. And tell Applegirl that there was a case of shoes there, too, with her name on them. If she sends me her coordinates, I’ll have them shipped to her.

See, there’s nowhere else in the galaxy to get good pho other than our humble blue orb.

Speaking of M!B!S! gear, SOMEONE who shall go nameless ordered a t-shirt out of the latest batch but has failed to pay up. But their loss is your gain! If you’ve recanted on your previous unwillingness to buy and want the shirt, contact willethompson through his Website. First come, first served! And yes, if you want, you can pay via credit card or PayPal (to me, and I’ll get the money to him, but tell him you’re doing it that way first).