I think someone has left an “h” out of a strategic word in that first panel.

When I see lovingly rendered stink lines like the ones in panels three and four, it reminds me why I don’t look at the animated versions of these strips on the main FBOFW site.

Ha ha! The Milford locker room smells absolutely disgusting! Oh, hilarity. It’s good to see that Coach Thorp and … uh … whoever the hell that is spend their potentially teenager-free summers ’roiding up and liftin’ weights down at the high school.

Ha ha, Darrin and Jessica are in deep shit! Because they live in Funky Winkerbean, what should be a vaguely awkward but ultimately fondly remembered act of wholly consensual sex will in fact result in one or more of the following:

Ha ha, the Perfesser’s life is shitty! I like the way he’s staring at the bottom of his glass as he contemplates the awful, wasted decades. 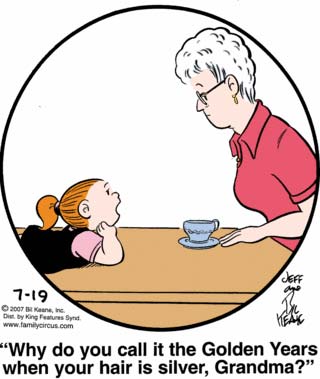 Man, Dolly’s quite the little shit. Notice that Grandma isn’t even attempting to maintain a look of grandmotherly good humor. Someone’s going to get bashed on the head with a coffee cup, but fast!