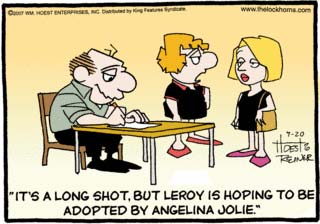 Normally, when the Lockhorns turns away from its wonderfully refined set of canonical jokes and attempts to inject an (almost always lame) reference to some aspect of contemporary pop culture, I’m strongly opposed. However, today’s gag has so many layers of perversion that I have to admit to being kind of charmed by it. I suppose it’s possible that Leroy simply sees adoption by a wealthy movie star as his ticket out of his failed marriage and soul-crushing job, and an opportunity to live in a huge mansion without having to work for it; it is a long shot, as Loretta notes, but he does appear to be about three feet tall, so maybe there’s a chance that he’ll be mistaken for a impoverished Belarusan orphan boy whose freakish, hairless appearance is a result of his parents living downwind from Chernobyl.

But since Angelina Jolie is generally summoned up in conventional discourse as a totemic sex goddess, and Leroy is sporting that crinkly smile that he usually gets when drunkenly flirting with statuesque blondes twice his height at parties, one has to assume there’s something more going on here. Does Leroy believe that Jolie’s “adoptions” are mere covers for her sexual appetites? Does he harbor some sort of infantilism fetish? More disturbing that the potential answers to either of these questions is the affectless way Loretta conveys this information to her dumbfounded friend. She’s so used to the bottomless well of numbness that is her marriage that it never occurs to her to leave or anything; the prospect that Leroy might take off for better prospects seems to fill her with neither joy nor despair. It’s just another thing that might happen.

Anyway, no other comics came close to this level of depraviy today, but a few tried.

Dear God, please let “bedbugs” not be code for some intimate part of the human anatomy.

In a desperate attempt to avoid thinking about this dialog as anything other than a transparent but incredibly awkward lead-in to a proposition, I’m focusing on Dawn’s fork. Her tiny, tiny fork. Maybe she’s on a new diet plan that works on the theory that if you eat with miniscule utensils, you won’t be able to shovel as much food in your mouth. Dawn’s determined to look good naked when she “tries something new.” Damn it, that didn’t work. 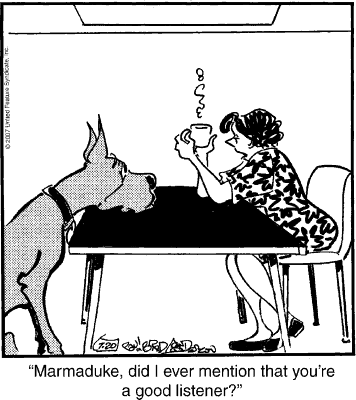 He’s not so much “listening” as “figuring out the most efficient way to kill and eat you.” But whatever makes you feel better, lady.