Oh, please, please, please let this be Lu Ann’s mother. Please. It only makes sense that Lu Ann’s wan, boring, unobtrusive personality grew up in the shadow of a larger-than-life southern belle, with her bright orange suit jackets and matching hair ribbons. It explains a lot, like why Lu Ann puts up with Margo’s constant stream of haughty abuse. Heck, if Lu Ann Senior and Margo start to bond, I will have officially died and gone to heaven.

Just because I like to make things even funnier in my mind, I’m imagining that Big Tipper is handing her cabbie a crisp dollar bill. “Now don’t spend it all in one place, sugar!” Of course, since the driver seems to be wearing an old-timey hat with a little button on it that presumably says “TAXI”, perhaps $1 does go pretty far back in his home decade.

Actually, from everything I’ve heard, the replacement of a brutal but essentially secular dictatorship with an elected coalition of religious-based political parties has resulted in Western dress becoming less common, not more, in Iraq. But if the Surge was abandoned and replaced with a strategy based on dressing Iraqis like the members of the Village People, the resulting political and diplomatic shitstorm would be 100 percent worth it, due to the extreme hilariousness that would result.

Dawn’s word balloon in panel two makes exactly zero sense. “I already wanted to study medicine — and now that I have made the entirely novel discovery that doctors are sometimes handsome, my choice becomes even more sensible!” Dawn, the more realistic attitude would be as follows: “Wait, I don’t have to go through the grueling process of earning a medical degree to net a doctor — there’s one standing right here in front of me! Now I can use the money Wilbur saved for tuition to help pay for the doves we’ll release at the end of our elaborate wedding ceremony!”

I know it’s impossible to tell from the Mary Worth art, which makes everyone looks like they’re in their 40s and it’s 1978, but anyone who’s gotten all the way through medical school and is now boasting at snoresville parties about being a doctor has got to be at minimum, what, 26? 27? FYI, kids: people in their late 20s who hit on college undergraduates = SKEEEEVY. I don’t want to see the funny pages lead a young generation astray on this. 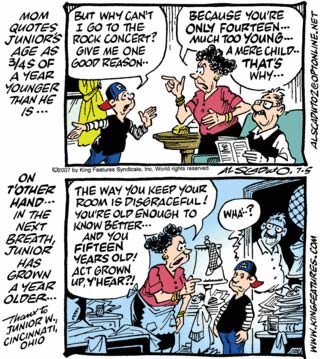 I do have to say that Junior’s “Wha’-?” may be the most subtle expression of ironic bafflement in this feature’s history.