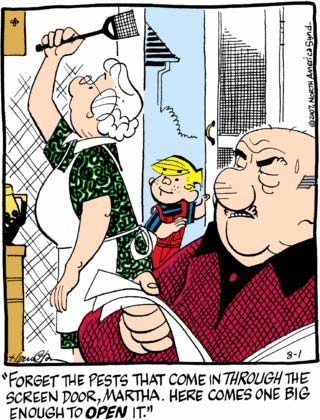 Not to keep on repeating myself, but there are few things more disturbing in this life than seeing that single drop of sweat roll slug-like down George Wilson’s florid, spiteful mask of a face. All of the things that it could signify — an incipient killing spree, a massive cerebral hemorrhage in progress, unwanted sexual arousal — are things better left uncontemplated.

Today, Dennis is identified as a pest, which is an epithet much more in line with his severely downgraded antisocial behavior. It doesn’t actually rhyme with “Dennis,” but I would argue that his current pale reflection of his past menacing glories ought to revoke his right to a rhyming nickname. I had a brief hope when my eyes settled on the word “pest” that Mr. Wilson was referring to a three-foot-tall fly-human hybrid, who had escaped from his basement lab and had arrived to wreak a gruesome revenge on his creator. This, to me, would have justified that creepy bead of sweat.

Ha ha, silly old person! You thought that as an adult you were still entitled privacy and autonomy! Has nobody pointed out to you that you’re old?

After our last visit to this feature, those of you who don’t read Popeye regularly are probably wondering if the strip continues to be totally bonkers. Today’s installment, in which Popeye, Olive Oyl, and Olive Oyl’s brother Castor cower in a Cold War-era bomb shelter from a bloodthirsty cow determined to bite off their heads and drag their corpses across the field, is here to answer with a hearty “Yes!”