Those of you who only follow Gasoline Alley through this blog have probably been wondering, “Gee, what’s going on with Slim’s plan to keep his neighborhood racially pure by dropping thousands of pounds of metal onto a playground? I’m sure he’s totally stepped back from the brink by this point!” Well, I’m sad to report that not so much. In today’s strip, the deranged Vietnam Vet charged with actually perpetrating this vile crime muses grimly on the mercenary’s creed: once that check clears, you have a job to do, and it doesn’t matter how many flattened homes and crushed bodies you leave in your wake.

Today’s Gil Thorp is nothing less than a divine symphony of severed limbs. You cannot convince me that any of the arms on display here are actually attached to the Thorpian quasihumans near whose heads they’re hovering — the scale and the angles are all wrong. Particularly baffling is the behemoth paw in panel one. Is Fu “Rap Sheet” Manchu supposed to be holding a TV remote? It seems unlikely: not only is the hand bigger than his head, but he’s only about eight inches away from the television set.

I love that, having been insulted, Coach Kaz calls his girlfriend to “check in” emotionally, only to be further taunted for his dimwittery. FEEL THE BURN, COACH! She’s not dating you for your mind; she only loves your hairy, hairy arms, and the furious fists at the end of them. 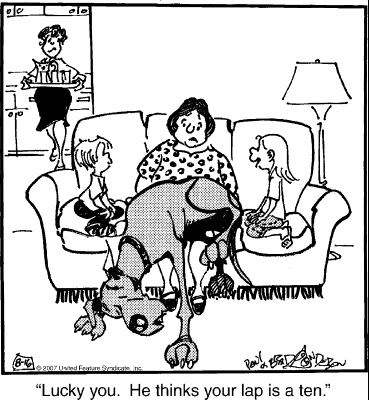 Like a lot of Marmadukes, this one doesn’t make any damn sense. It could be sort of fixed, though, if the caption were changed to “Your lap’s so nice, he thinks he’s died and gone to heaven!” Get it? Because with Marmaduke’s drooping extremities and slack features, it appears that this hapless woman has the enormous corpse of a Great Dane sprawled across her thighs!

Of course, we all know that, thanks to Marmaduke’s many sins, he won’t actually go to heaven when he dies. 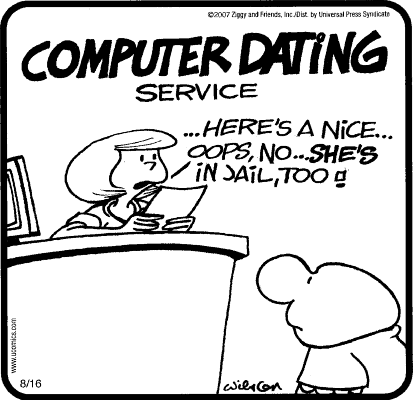 Looks like somebody doesn’t really understand what “computer dating” is all about. Hey, Tom II, get with the program! You can have your very own computer in your very own home these days! I don’t want to say this cartoon is entirely inaccurate, though: it is true that the only women who would deign to date Ziggy are in prison.