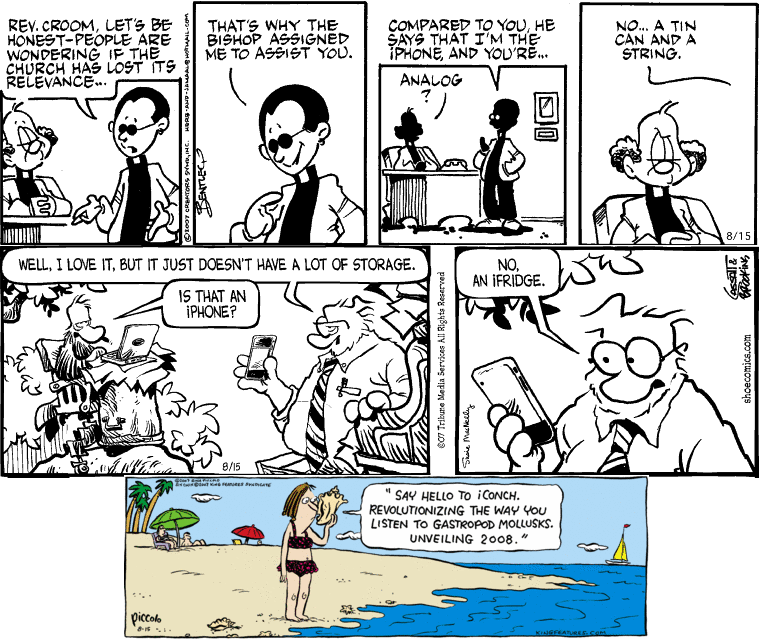 Oh, hey, everybody! Did you hear that it’s iPhone day in the syndicated funny pages? No? Well, fortunately, these three team players did. Yes, there’s nothing that will help make the comics relevant to young people like jokes about a hot piece of electronic gear that was released to great fanfare and media hype eight and a half weeks ago. Actually, that’s close enough to what I imagine the comics lead time to be that it makes me think that someone got a look at gadget-hungry types waiting camped out in the streets outside Apple Stores and thought “comedy gold!” And thank goodness we’ve finally got to see the results.

Herb and Jamaal has worked its cutting-edge cell phone joke into a storyline involving a hip young priest who’s been sent to clear out the clerical deadwood from the diocese of wherever the hell it is that Herb and Jamaal takes place. This might be interesting, except that nothing that ever happens in this strip is remotely interesting, so this won’t be interesting either. I like the way that “hip” is signified by the earring and the indoors sunglasses — he’s like Herb and Jamaal’s Coach Kaz! Though with less propensity for violence, hopefully. The strip is pandering to the newspaper comics’ core audience of angry old people by making this fellow as unlikable as possible; presumably he’ll be shuffled off to another diocese in disgrace soon enough, once the altar boys start complaining.

Shoe, meanwhile, manages to make no sense at all in its particulars, though it does manage to reflect the higher truth of its characters’ well-established personalities, since the Perfesser is well known for his food addiction. Six Chix thinks that the “a seashell is like a cell phone” joke somehow becomes funny when transformed into an “a seashell is like a particular, much-hyped kind of cell phone that was recently released” joke. For the record, it doesn’t.

Just in case anyone’s wondering, the new, post-Johnny Hart’s death, assembled-from-existing-drawings B.C. is terrible. I’ve never been a huge fan of the feature, and I sort of have been waiting for the new team to find its bearings, but it’s kind of shocking how much worse it’s become. Today’s strip practically boggles my attempts to enumerate criticisms of it; I’ll start with the weird, mangled look of the figures in panel one (is this what happens when the new team deviates from pre-drawn templates?), the actively crude looking baseball and blimp, and the bizarre orthographic choice to end “Lookie, the blimp” with a period rather than an exclamation point. The saddest thing, as I’ve noted before, is that zombie B.C. is occupying space in hundreds of papers that could be used by someone trying to break into the comics business, or, failing that, by a nice ad for an auto dealership that would help the newspaper afford to buy more comics, or pay its copy editors. 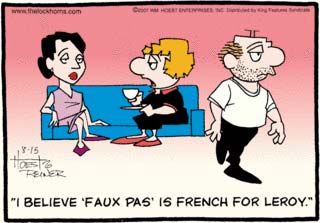 Actually, “Leroy” is French for … oh, you know what, just forget it.

Oh! And! Faithful reader Flipper earned that virtual penny and more with this utterly amazing Mark Trail squirrel montage. Are you ready to have your mind blown?

Also, faithful reader loudfan shares this evidence that Spider-Man is whoring himself out for the postal service. Thrill as he runs errands for Aunt May! Gasp as he surfs the Internet! Boggle as he puts a cold compress over his eyes, for some reason!