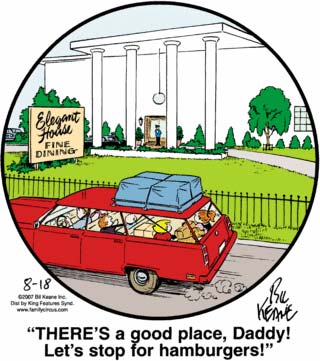 There’s something I find really unsettling about the huge, featureless expanse that is the front of “Elegant House”. There are no windows, just hundreds of square feet of unbroken whiteness, with a tiny door guarded by someone in uniform. Either its some kind of demon-haunted hellmouth, where hungry patrons are lured into a horrifying netherworld, or it’s a front for a secret CIA torture facility. Either way, I really hope the Keanes stop by for dinner, obviously.

“And by ‘old adage’, I clearly mean ‘rambling bit of blather I made up to stretch over three panels worth of thought balloons.'”

Today’s strip pretty much solves the debate over Rev. Croom’s denominational affiliation. Obviously he’s part of the Anglican Communion, which requires its clerics to use Commonwealth English grammatical constructions such as “in hospital,” “at university,” and “in ministry.” 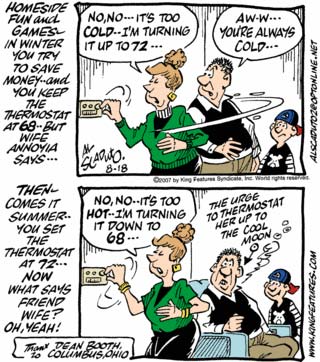 Congrats to faithful Comics Curmudgeon reader Dean Booth, who got a sweater vest and an “urge” in his very own TDIET! Perhaps Dean can explain just what the motion line or planetary ring or whatever it is wrapping from around his shoulder all the way to the front Annoyia’s chest is supposed to represent. I’m fairly disturbed by the fact that little junior is grinning as the Dean stand-in clenches his fist and steam begins to rise from beneath his collar. Apparently there’s nothing he enjoys watching more than a little domestic dispute! Homeside fun and games, indeed.