This week’s comment of the week is brought to you by … you! Well, more specifically, by one of you.

“I’m pretty sure Eric and Nora were actually discussing Family Matters. I’m guessing the conversation went something like this: ‘Say, did Urkel have a catchphrase?’ ‘What do you mean, Eric?’ ‘I mean, all one-note black sitcom stars have always had a catchphrase, right? You know, something like Whatchoo Talkin’ ’Bout or Dy-No-Mite! So Urkel MUST have had one, but for the life of me I can’t figure out what it was.’ ‘Hmmm, maybe his inimitable voice was a sort of a play on the idea of a catchphrase?’ ‘No, he must have had … Margo — I didn’t hear you arrive!'” –jakester

But that’s not all! There are also hilarious runners-up!

“I don’t know what’s more delicious about today’s strip: the fact that Margo’s thought balloon is so stilted, or the fact that Tim labels his journal like he’s a 12-year-old girl.” –King Folderol

“I’m glad Eric has learned the lesson that was drummed into me while living in Manhattan: Never, ever, lock your front door.” –Mad Dog Rackham

“Based on the placement of the Washington Monument in the background, I would guess Gretchen is about to run up the steps of the national headquarters of the Daughters of the American Revolution and plant her bomb. What in the heck does she have against them? ‘I’ll teach them to have a display of Amish quilts!'” –smacky

“Just so we can keep this never-ending series of angry departure scenes going, I’d like to see the ghostly figure of Drew’s super-ego separate itself from the rest of the good doctor, make come cutting remark (‘Really, Cory, you are such a douche!’) and then speed off in some little phantom car. Next week: Super-ego catches up with Dawn and cons her into some meaningless revenge sex.” –JamesinMaine

“Dawn found me and Vera at… Y’know, Dad, you’re not making this any easier by snuggling with Mary while I’m talking. No, seriously, knock it off. You’re skeevin’ me out.” –The Spectacular Spider-Brick

“I get the summer activities that are portrayed here: surfing, volleyball and suntanning. What I don’t get is why Veronica’s activity — smoking giant doobies and sniffing glue while wearing a Zorro mask — is limited to summer. It seems like that could be fun all year long.” –Darkefang

“Panel two [of Gil Thorp]: If anyone can tell me what the hell is going on here I will give them a dollar.” –Moon Mullins

“What’s more striking to me about Shoe is the omenous half-shading of the Perfesser in the second panel. He looks like he should be saying, ‘How many would the mayor serve … you know, if I slaughtered him and roasted his flesh.'” –JPool

“When I read about the new, ‘timeless’ semi-retirement mode of FBoFW, I assumed it would just start being like the other comics on the page where nobody ever ages or changes or graduates from high school. I didn’t expect this kind of bizarre, disorienting, Bil-Keane-meets-Billy-Pilgrim experiment in nonlinear narrative.” –Hip Young Urban Plugger

“Mary Worth may move at a glacial pace but it befits the cold, cool iciness of what should be her heart.” –Dingo

“Remember this moment. It’s the moment where Drew realizes that he will never have an erection again for the rest of his life.” –Eleusis

“MT: I think (*shudder*) I can explain the blue ducklings. Okay — see the color of Homer’s shirt? That’s right. He’s the father. This … explains … so much.” –Gold-Digging Nanny

“The Bum Boat’s decor looks like a hurricane blew a strip-mall Red Lobster all the way back to 1977, where it crashed directly into some dentist’s waiting room. So basically, I can’t think of a better place for Drew to sit and watch his dad mack on Mary Worth while moaning about losing both Dawn and Vera in the space of a single afternoon.” –Trilobite 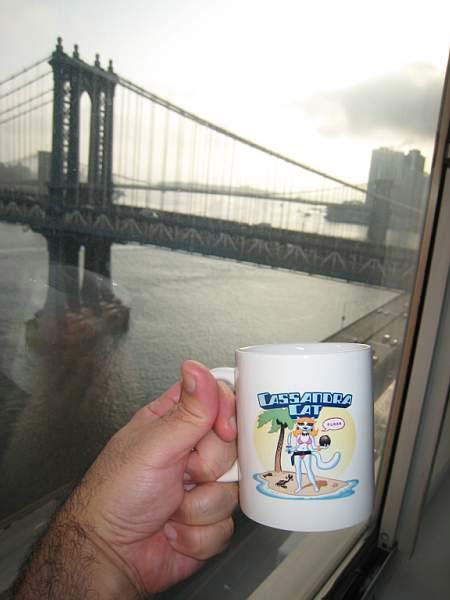 More Bob Weber, Jr.-designed Cassandra Cat items are available from the Comics Curmudgeon store, including, God help me, thongs. I’ve only received pics of mugs and babies so far, so I’m definitely looking for some visions of Curmudgeon readers in some of the clothing that they’ve purchased! But not the thongs. Please, God, not the thongs.

And hey! What week would be complete without a little love for our advertisers?