Let’s leave aside for a moment the cringe-inducing and increasingly intrusive pederastic vibe that the Rex-Niki relationship is giving off. Even if we pretend none of that is happening (LA LA LA I CAN’T HEAR YOU), the text is quite amusing enough even without its subtext. Surly Dr. Morgan, who can barely be bothered to rescue his ex-nanny, practice medicine, be nice to his wife, or acknowledge his daughter, now suddenly is all excited about standing waist-deep in freezing water and gutting a fish? I have to imagine that this burst of activity is springing out of Rex’s infinitely deep well of self-hatred: maybe Green Lumberjack Shirt Rex, mentor to Young Urchin Niki, will like himself! This whole project seems so blatantly destined for disaster that I can barely contain my excitement. Presumably after about twenty minutes Niki will freak out because he’s having Katrina flooding flashbacks, and the overpowering stench of mothballs will drive away all the fish, so Rex will tell Niki how disappointed he is, and then they’ll drive back to the city in silence. Then it’s all over but the quiet, private weeping.

The Morgans’ previous attempt at water-based recreation didn’t go particularly well, either. And yes, Rex apparently feels the need to dress like a complete dork whenever there’s the slightest chance that he might end up in a river.

Wow, it’s kind of unusual for Dick Tracy to shy away from showing us a scene of unspeakable carnage like this; admittedly, the strip’s gaze is sadistically lingering on the poor Baron’s shock and grief, but that’s subtle stuff when compared with the mangled bodies that are this feature’s stock in trade. Perhaps Dick’s descriptions can grow increasingly graphic over the course of the week. “…and there are bits of bone and viscera everywhere … they’ll need a firehose to get it off front steps of the Capitol …”

Ah, life’s great cycle, told in FBOFW’s new achronological style. Panel five depicts the moment when Deanna’s creative spirit was last allowed full expression, before her stifling mother began the job of dampening it; the first three panels depict the snuffing of its final embers, as a smirking Michael goads their children to ensure that she’ll never have a moment of self-reflection that might lead to her escape. 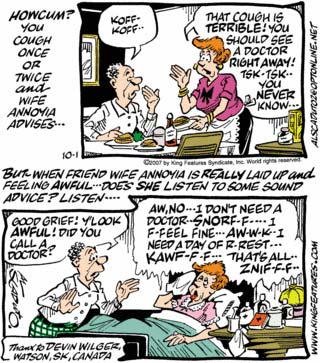 Yet another Curmudgeon reader gets TDIET props! Devin Wilger of Saskatchewan is none other than faithful reader Citric, and I’ll let him describe the panel in his own words:

Basically, the strip is inspired by my father (and, to a lesser extent, me) … [my father] has since surpassed anything I was annoyed with before and fell off a building, and broke his nose, in separate incidents, and didn’t go to the doctor after either one. And yet, if my mom has something bothering her, he does insist she go.

It’s sort of creepy to see my dad depicted as my wife though. I’ll say that right now.