Hey everyone, do you know what time it is? That’s right … it’s COMMENT OF THE WEEK TIME!

“‘I came east to help cousin Lu Ann, but I had selfish reasons too, Aristotle.’ Yikes. I just realized the guy’s name really is ‘Aristotle.’ I thought Ruby was just being sarcastic. You know, like: My life in Dallas wasn’t going so well, Einstein. I needed a change of scene, Copernicus. Maybe permanently, assface.” –SmartPeopleOnIce

And the runners-up — extra hilarious, this week.

“It occurs to me that Slylock Fox isn’t so much doing good detective work here as being the douchebag who shouts out how the magician performs his trick. ‘Count Weirdly said that his assistant had dirty ears, and pulled out a shiny quarter to prove it. Slylock suspects the quarter didn’t come from behind the assistant’s ear. How did Weirdly do it?'” –posiduck

“Dawn can seek ultimate revenge by seducing Vera’s alcoholic brother and spending his vast fortune. Or she can just walk over and throw lye in Vera’s face. It’s her call.” –Anonymous

“Prof. Aristotle comes out of hiding to take the weak member of the herd. ‘Hey, you must be feeling lonely and far from home … let me cull you.'” –Frank Parsnip

“That ‘child,’ with its grim, resigned expression and a head ringed with the same dark matter as Les’s, looks less like an adopted orphan or even the product of an ill-advised spree of sperm shopping on the part of Bull, but rather a long-lost elder sister of Les’s who’s been run through a dryer until she’s suitable to play out these two men’s forbidden, androgenetic fantasies. She looks like she’s already calculating the best time to slip outside for a smoke.” –SecretMargo

“I strongly suspect that Mr. Wilson has, on a regular but gradual basis for the past decade or so, spiked his wife’s baked goods, inevitably mooched by Dennis, with either strong sedatives or hallucinogens, or both. Thus why he’s not at all worked up about Dennis and smilingly shoos him out. George Wilson is finally master of his own fate, and if the price to pay is the neighbor kid turning into a spaced out lei-wearing stoner before he’s even 10, so be it.” –Andrew Leal

“If ever there were a couple that did not suggest a sexual attraction or emotional connection, it would be these two. And in a world populated with Garys, Alans, and whatever-the-hell-his-name-is-Margo-is-about-to-kills, the standard for this sort of thing is already pretty darn low.” –A New Day

“I hate to break it to Dawn, but in the first panel Drew’s paper has her rock beat.” –Inspector Dim

“[Drew]’s one tactical opportunity to avoid severe damage to his effeminate features is to run behind Vera and let her take the pulping while he makes a frenzied break for the car. Elsewise he may as well drop into a fetal position and shriek until help arrives, half anticipating the usual shamed look on his father’s face upon seeing his son having been pummeled by a berserk waif in a pink blouse.” –Sunny Mel Blatherscythe

“Nobody needs saving from rain and floods like aquatic waterfowl do.” –Jym

“Men and women are totally different, but their crotches look exactly the same.” –Lisa Simpson

“I think this Sunday’s MT should be on ducks. Ordinary ducks like Shirley, but with unusual and little-known facts like ‘Ducks can swim’ and ‘Ducks can have more than one nest’ and ‘There are too many damn ducks in the world already, and they’re infringing on corporate development, so kill all the ducks you see.'” –Concrete Queen

“YEAH BABY! A TECHNOLOGY JOKE! Technology’s always funny, right? I’m going to make a comic where it’s nothing but a young person saying ‘iPod’ to an older person all day. And I’ll win the hearts of millions.” –Cheeky Wee Monkeys

“Drew, on the other hand, might be in for a rough time. There’s actually some hidden potential for drama in this story, as Mary will have to decide whether her sexless ‘relationship’ with his dad should affect Drew’s punishment for the crime of Not Taking Advice. Will being Jeff’s son let Drew get out of this with nothing worse than losing both his incredibly easy co-ed girlfriend and his ponytailed office-drone inamorata and sitting through the mandatory finger-pointing parade of platitudes? Or will the silver-haired she-beast demand more from him?” –Trilobite

I should add that I have no idea which comic the next-to-last comment, about technology jokes, is referring to, but it’s really pretty much always a timely observation.

Also! Many of you have successfully purchased Bob Weber Jr.-designed Cassandra Cat items from the Comics Curmudgeon store. But do any of you look as adorable in them as the daughter of faithful reader Klipper? 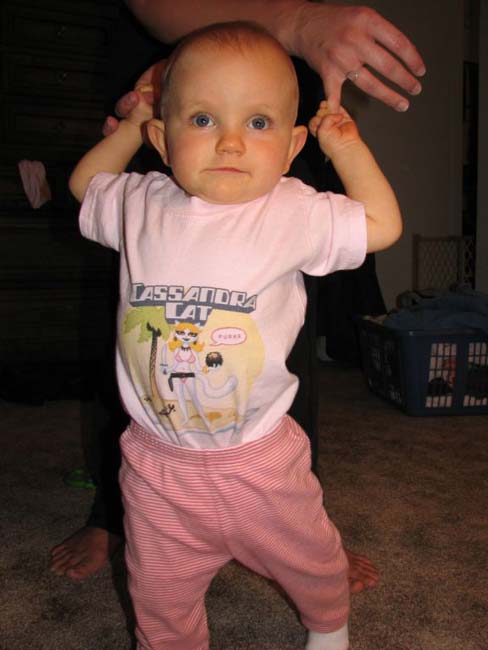 “My wife and I discussed whether the Cassandra Cat onesie would be appropriate for our 10-month old daughter, Zoe. Unfortunately this was after I’d bought it. Ultimately we decided that she has no idea what she’s wearing — if she had her druthers she’d run around naked and covered in poo — and this can’t be any worse than the multitude of pink kittens and bunnies and crap that she has to wear every time we visit the relative that bought her the outfit. And if she does somehow understand it, the Cassandra logo will only influence her to become a strong woman who cuts the balls off disrespectful or otherwise predatory men … and I’m ok with that.” He adds that he also bought an Right Fist O’ Justice magnet, “suitable for all ages.”

Anyway, tons of you purchased Cassandrawear, and while surely none of you look as cute as little Zoe, you should totally send in your pictures anyway.