Ahh, a new week stretches before us! And what better way to avoid the degradation and sleaze that’s oozed into every corner of American life than to spend a little time with those good, old-fashioned entertainments: the soap opera comic strips! Let’s check out the narration box in today’s Judge Parker! It certainly won’t be a series of thinly veiled innuendos.

Er. Well, uh, how about Mary Worth? The chances of some seemingly random object in the background being carefully placed so that one of the characters will appear to have an enormous erection are pretty slim, right? 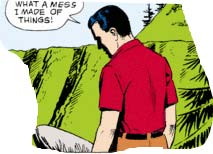 Jesus, for once I’m really glad I read this feature in color.

Well, what about Rex Morgan, that handsome, upright representative of all that is good about American manhood?

Wow. I don’t know what that means, but it sounds … it sounds very, very wrong. OK, screw you, soap opera comic strips!

Boy, this sure is an exciting episode in the adventures of America’s toughest crime fighter! There’s something naggingly familiar about it, though…

See, this is another thing that I have grown sort of fascinated with in Dick Tracy. I wouldn’t say I like it per se, but it also doesn’t anger me as much as you might think it would. I’m pretty sure that continuity strips by mandate must include some repeated information for the benefit of those who only tune in every third day or so. You could take the Gil Thorp hackery route and just use this as an excuse to repeat panels from the previous day. Or you could do what Dick Tracy does, which is to recreate the same basic sequence of events that occurred in the previous strip, with all newly drawn panels featuring slightly different dialog and “camera” angles. It gives the strip a dreamlike quality in which the narrative thread slips backwards and forwards in time, sometimes echoing back at us slightly different versions of the same moment for days or even weeks, and sometimes lurching violently forward into action that seems to violate all laws of logic and continuity. In something of a bravura performance, today’s strip actually manages to leave the plot less advanced than it was at the end of Friday; fortunately, the Baron will probably manage to mention sotto voce that he’s already set the fuse for at least two of the next four days. 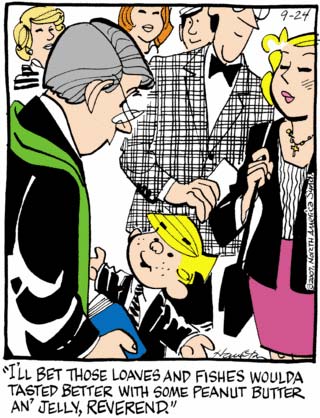 Dennis is actually a being a lot more menacing here than you might think at first: he’s essentially telling the good reverend that he’d make a better savior than Jesus. And since the combination of peanut butter, jelly, and fish would taste vile beyond imagining, we get a good look at the sadistic impulses that underlie his fantasies of omnipotence. Imagine the multitude sitting around on the grass, choking down the weird combination of fish and jam and peanut butter, while Dennis the Messiah glares down at them saying, “Whassamatter, you don’t like the feast I’ve prepared for you? Are you a bunch of ingrates?” They’d have no choice but to avoid his gaze and say “It’s good that you did that, Dennis.”

Today’s Foob flashback reveals the most harrowing aspect of Grandpa Jim’s stroke-induced aphasia: it renders him incapable of bending his grandchildren to his will with threats of violence, as is his wont. 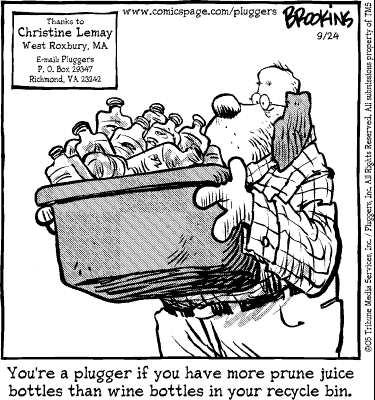 Thanks to their court-mandated rehab program, pluggers have had their one pleasure in life taken away from them. Also, they’re badly constipated.