Hey kids! I’m back! I have returned from the glorious Pacific Northwest — and from FOOB COUNTRY! Well, I was several thousand miles away from the Greater Toronto Area, but I swear to God I saw not one but two coffee shops advertising “GOOEY CINNAMON BUNS” (yes, they specified gooey). No signs of Anthony Caine, not even on the money; when I went to Belgium in 2000, there were Magritte men with umbrellas on their pre-Euro currency, so I half expected to see the Mustache on the Canadian $5. I did once again get spotted in public by a self-described “obsessive” reader, at Bumbershoot right before it got intolerably claustrophobic (a shout-out to you, Eli!).

Before I launch into this week’s COTW, I urge everyone to offer a big hand to Uncle Lumpy for his excellent posts and his superhuman posting schedule (I apologize, but I must urge you not to get too used to it). And a huge hand to all of you for your generosity in the garage sale. Your money gives me a warm and fuzzy feeling and makes it possible for me to continue to make fun of comics instead of scouring the Internet for new editorial clients or, God forbid, getting a 9-to-5 job that would frown on outside blogging interests. Everyone who contributed will be getting a personal thank-you from me on Monday. (And if you sent me an email this week and I haven’t replied yet, please resend! I had tons to wade through when I returned and I’m sure I missed some.)

More comics tomorrow (and Jesus Christ how could I have gone on vacation during both The Screwing And Then The Screwing Over Of Margo and The Seduction Of Brad DeGroot?), but until then, here’s the COMMENT OF THE WEEK, BABY!

“Robin is wearing blue. Meredith is wearing pink. Lynn uses these cliches to let us know who is male and who is female. If Robin were a little older, she’d paste a mustache on him.” –tblue

And the runners up! Good to see that you all didn’t go on vacation with the funny.

“Yes, it’s LOLcomics! Curtis: I CAN HAS RACOON EMBYROS ON A DOUGH BRICK? (WT)DT: OLD BARON IS OLD FC: UR DOIN IT WRONG Luann: IM IN UR KITCHIN THREATNIN UR SEXUALTY Big Dog: BIG DOG IS BIG” –The Spectacular Spider-Brick

Phantom: “Yes, because if anything has been shown to give people hope, it’s crudely spray-painted murals of a man wearing tight spandex striped briefs on the outside of his unitard. ‘The Ghost-Who-Doesn’t-Live-Around-Here says vandalism is keen!'” –Trilobite

Get Fuzzy: “Ladies, don’t get too excited. I’ve seen this type before, and roomed with it a couple times: Rob Wilco’s apartment reeks, and he only has one set of bedsheets. Do not ask how often he does laundry.” –Carmichael the Polar Bear

Judge Parker: “I never before realized that Sam Driver is basically L’il Abner with a law degree: Studly Comics Guys With No Interest In Sex Despite Being Constantly Surrounded By Screamingly Hot Women Like Indians On Custer.” –cheech wizard

“So, for our hunks we have: A lawyer with no sex drive; an animal that appears in a children’s comic; two dimwits from a defunct comic; a gay guy.
*Sigh*” –Brown-eyed Girl

“Apparently For Better Or For Worse isn’t just the name of the strip, it’s also some sort of contract rider.” –SmartPeopleOnIce

RMMD: “I love Peter’s demands and schedule. Makes up for lack of a) Hugh, b) T, and c) A.” –Gold-Digging Nanny (formerly Lame Name)

MW: “There’s no such thing as a post-coital moment in Santa Royale. That would require some sort of coitus.” –Jym

“Mary Worth is actually giving good advice! But I still think Drew is going to end up with that pretty, pretty face a mess of razor slashes.” –Laura c

“Sigh. Elly is from my hometown? Really? And I was so hoping I wouldn’t have to napalm Vancouver and salt the earth. Oh well.” –Tats

“My daughter is almost exactly Meredith’s age. You know how that picture book conversation would go at my house? Her: ‘Mom, who’s that?’ Me: ‘That’s your grandma. She’s my mom.’ Her: ‘She’s your mom, and you’re my daughter?’ Me: ‘Uh, nooo, you’re my daughter…’ Her: ‘Hey mom? What do you call a fish on your head? A fish-heady!'” –andreavis

“Let’s review: TJ is ‘accidentally’ late to make dinner for Brad’s dinner date and so has to hang around … to see what happens … and then shows up a few days later to strut his stuff in his fancy new clothes just for Brad … and then proposes himself as a roommate … All we need now is for his issue of Fireman Fantasies to ‘accidentally’ fall out of his pocket while he’s talking to Brad: ‘Hey! What’s that?’ ‘Oh, just some mag I found. Wanna look at it … together … in your fancy new chair … ???'” –odinthor

A3G: “Tonight I’ll be with Eric and — although I won’t have an orgasm, it’ll be the closest I can ever possibly come to having a human experience.” –King Folderol

“Eric’s being a sleaze by leading Margo on for the hott sexx while he really likes not-Margo, and it’s all made a few degrees skeezier by the fact that not-Margo’s husband is his brother … and probably alive. That kind of behavior proves he’s perfect for Margo. That’s the real tragedy of this whole storyline.” –The Avocado Avenger

Oh! And! Over this week arrived the very first pics of CASSANDRA CAT GEAR! Faithful reader Flealick captured the moment when Sable, the neighborhood stray, encountered Cassandra (in mug form). “As you can see from her upraised tail in the first picture,” he says, “she has suddenly come to the realization, on sight of the mug, that the kindness of the avuncular man giving her treats may have a sinister undertone. As finger-quoting Margo would say, this man is ‘creepy.'” 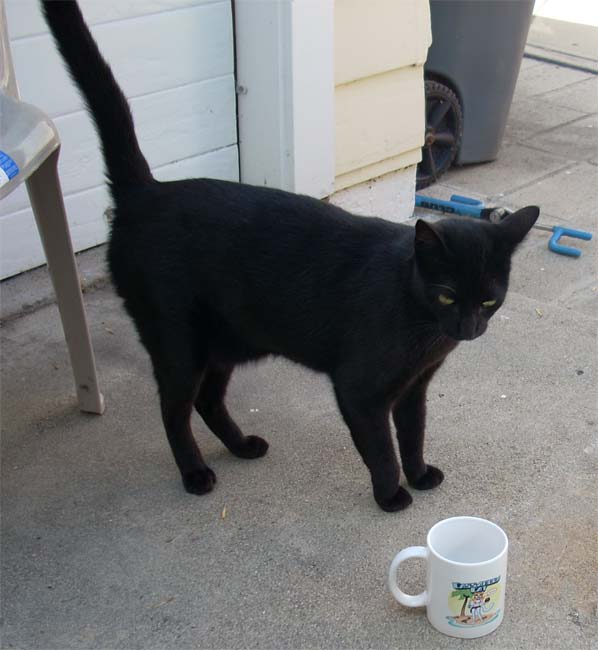 Oh, don’t be so hard on yourself, Flealick! See, this pic looks innocent enough. 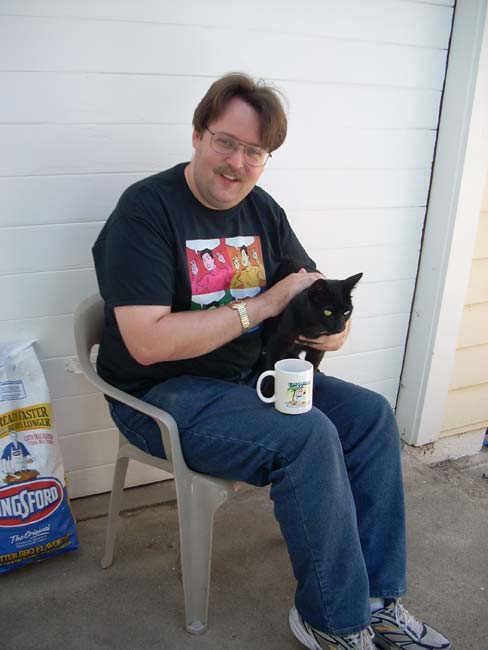 More Bob Weber Jr.-drawn and authorized Cassandra Cat merch is available at the Comics Curmudgeon store. Tons have been sold, so send in the pics! Except those of you who bought thongs. You can keep those pics to yourselves.

Hey, and did someone say “advertisers”? No, well, too bad, we’re giving them some love anyway.