You know, unlike some people, I was actually able to relax on my vacation. 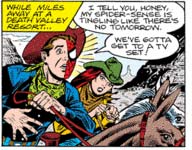 Unlike Peter Parker, who is physically unable to resist the siren song of television, I was able to go eight whole days without reading any of the comics that weren’t featured on this site in my absence. So naturally I had to spend the better part of this morning reading everything I missed. Curse you, Houston Chronicle, for making it all so darn easy!

I was unable to decide on my favorite panel from the days I missed. Was it this one, where Gil Thorp openly boasts that he’ll call in his mob ties to silence journalists who dare question his insane coaching decisions?

Or this one, where Eric Mills imagines the sick thrill he’ll get from roasting Margo alive? 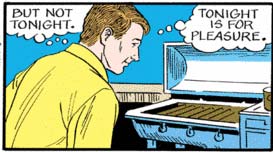 Silly Eric! Margo’s carapace is deceptively beautiful, but it will take more heat than an ordinary household grill can put out to damage it.

Anyway, no more living in the past! We must return to the present … where we find that things haven’t really changed much in the past week or so.

Blondie and Dagwood, for instance, are still caught in a hateful game of marital oneupsmanship that is played out via conspicuous consumption. There is, of course, only one way this can end: with the Bumstead house going up in flames in some kind of mutual potlatch gone horribly awry — both of them still inside, sadly.

Mark Trail has stepped away from the brink of a potentially interesting exploration of out-of-control tabloid media and out-of-control development hell-bent on getting its way to slip into a familiar groove. You can’t see it because of the dramatic shadows, but that dude in panel two has sideburns. Sideburns. Sideburns and a club. It’s fisticuffs time, people!

And, as ever, Marmaduke’s insatiable hunger for the flesh of human children rages unabated. It’s good to be back in the comics!

(Confidential to Tucson-area readers: Some Comics Curmudgeon fans are gathering at the Macayo’s at Ina and Oracle at 1 p.m. this coming Saturday if you’d care to join them!)