Hey everyone, it’s Sunday night, and you know what that means … it means the COMMENT OF THE WEEK!

And it also means the very funny runners-up, obviously.

“Dick Tracy, it begins to dawn on me, is Wagner for the comics page. The vast dilation of time … the protracted sequential repetition … the ambiguous, perplexing perspectives (so very like the disorienting harmonic confusion of, e.g., Tristan) … the omnipresent fire and death … yeah. It all fits. Today, witness the return of the ‘My Gretchen’ leitmotif, subtly transformed to seem smaller, fainter, more querulous, as if borne through the most poignant tragedy. (‘Poignant’ here is used in the sense of ‘having a considerable splatter radius.’)” –Keg of Curd

“I’m pretty sure this is the first time in recorded history that the phrase ‘the Wall Street Journal’ has concluded with an exclamation point.” –dbp

“The only thing Dick Tracy renders more lovingly than the excruciating torment of criminals is chins. Dick Tracy loves chins. Today we have the beautiful trifecta of Dick’s utterly rectangular chin, the Baron’s respectable jowls, and the elongated majesty of … whoever that is.” –Reynard Noir.

“If this strip has somehow put a subliminal image of death into my head, and that goddamn butler shows up when my time comes, I swear I will come back and sue Batiuk and his heirs from beyond the grave.” –Quäsenbo Pan

“I’ll just add that I’ve never seen a worse waiter than the one in Archie. Two glasses, and he looks like he’s about to topple over. Has Betty’s pantslessness given him a giant erection? Is he slipping on the mess on the floor caused by Betty and Archie’s lovemaking? What I love most is his look of grim determination, as if Betty and Archie have been screwing on the same spot every day for the last month, and Mr. Waiter has up until this moment always avoided their love-jasm. Not today, however. ‘Today,’ thinks the waiter, ‘Today I’m just going to walk through it. Screw them and their love juices. I have a goddamn job to do, and today I’m going to do it, and not by some scenic route, either.’ His customer waits with all the anxious expectation of a sports fan, or just a fan of watching people fall violently backwards.” –RaJ

Mary Worth: “Can we please stop seeing three-hair combover dad pawing his daughter? It’s surpassing creepy and moving into … what comes after creepy? Crawly?” –chumley

“For this Spider-Man arc to generate any real suspense, they need to tell us just what TV show they’re trying to fly back home in time to catch. What are the stakes? Are we even talking new episode here?” –BlinkAndItsOver

“I’ve come to the conclusion that there is only one tear in this strip; it just moves around from character to character, sort of like a virus. Except for Margo, of course: she is immune.” –Piper Grey

“Spider-Man impresses me with its ability to be completely uninteresting. At least the Phantom usually has someone holding a gun or a knife or sharp pencil or whatever; this is just one strip away from being Spiderman’ll Do It Every Time: ‘Webbo has all these amazing powers fromma spider but whoooaaa he can’t deal with the crazy airport security when hez gotta make a plane!'” –RoboMax

“So is today’s lesson about thriftiness? Because cans of shaving cream are way more expensive than disposable razors. A true plugger would lather up with soap stolen from the men’s room in the gas station.” –Jym

“Oh, the second panel [of Gil Thorp] warms the heart, seeing the teamwork between our heroes — one able to read numbers, the other words: together they are unstoppable literacy machine!” –SecretMargo

“Niki just got back from 1985, judging by that boombox.” –Tweeks_Coffee

And hey, did someone say “Curmudgeon fan meetup?” A note from faithful reader The Specatcular Spider-Brick:

Here are some pictures of the Madison ‘Mudgeon Meetup 2007 (a.k.a. MMMMMVII). We gathered for dinner Friday at Ella’s Deli, an eclectic spot with some odd decor that reminded us of the comics. We saw a Popeye straddling a rather Freudian rocket and soaring across the ceiling on a wire; a table filled with model trains à la John Patterson; and a Mark Trail lookalike with an evil twin mustache trying to hook an angry muskie (though the way he was bending over, it may well have been Rex Morgan in hip waders). 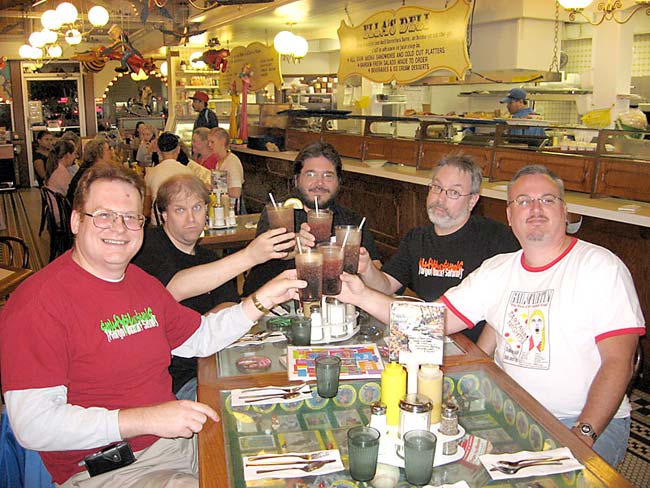 And here’s another. Again, quoth The SSB: “Here, Dingo, at right, displays a treasure Jamus found in a used bookstore — a compilation of TDIET made back when it was still timely! Or did the panels from those days refer to situations in the Roaring ’20s? I think at least one had something to do with waiting for the stagecoach. Meanwhile, Gadge Cubic wonders when the TDIET he sent in will be printed.” 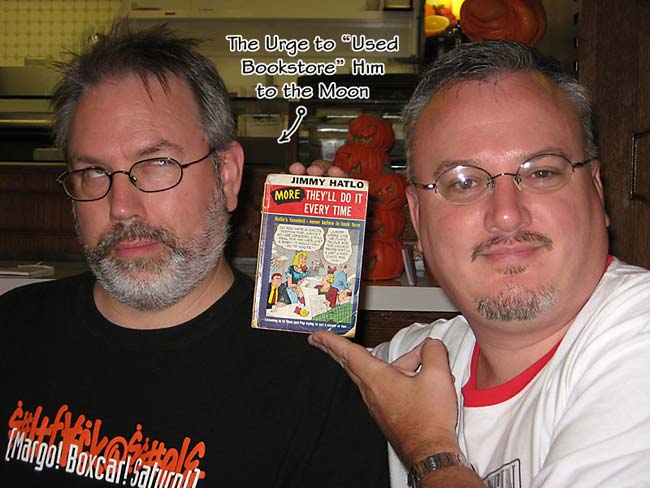 And finally, let’s pitch a little love at our adverisers.