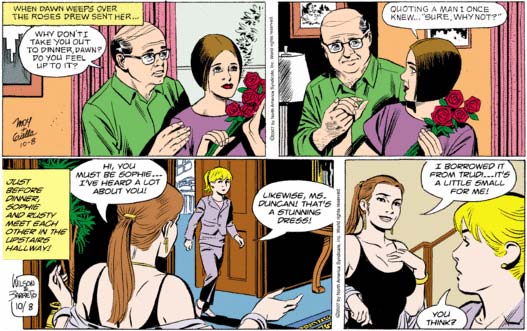 “Sure, why not” vs. “You think?”: The sassy young ladies of the soap opera strips come up with the closest things to snappy comebacks allowed in this genre. Dawn has bizarrely chosen to encapsulate her sass as some kind of bit of quoted wisdom. My question: is this some flip statement that Drew made once, long ago, that Dawn memorized like every other sentence he uttered in her presence? Or is it just another in the long line of Mary Worth things-presented-as-quotes-that-aren’t-actually-quotes? A trip through the archives would answer this question, but I don’t have the spiritual strength for it this afternoon. I will say this, though: Dawn’s tremulous tear in panel one is actually better drawn than the single droplet usually seen on the faces of the various girls in Apartment 3-G.

Meanwhile, Judger Parker’s Sophie has come up with the only appropriate response to Rusty’s increasingly desperate bids to bend Sam to her legal will. Unable or unwilling to recognize her old classmate’s total disinterest in her assets, she’ll be humping the place settings before she’s through. Sophie’s droll reaction indicates that she knows well enough why Sam and Abbey expanded their family by adopting a pair of homeless millionaire adolescents rather than via the more conventional route.

By the way, does anyone know how old exactly Sophie is supposed to be? Is she ten, or forty and suffering from some kind of glandular condition? Her little lilac pantsuit is kind of freaking me out.

Calling the heads in Dick Tracy “enormous and terrifying” isn’t exactly breaking new ground, but — God damn, those heads in panel two are enormous and terrifying. They sort of remind me of characters from video games in the mid-90s — two-dimensional drawings wrapped freakishly around some overly simplistic polyhedron. Anyway, the face on the front of the slightly smaller and less terrifying head in panel two looks glum, and why shouldn’t it? Dopey Dmitri and now-exploded Gretchen get all the credit in Dick’s exposition, but what about him? Doesn’t he at least rate an unimaginative and stereotypical name, like “Ivan” or “Hans”?

Huh, so Cully Vale is a murderer. I’m assuming Gil already knows this — he always seems to be one step ahead of his cretinous students (a talent that sadly doesn’t seem to translate to his coaching, but never mind that for the moment). Since Gil seemed pretty blasé about having his baseball team coached by a fraud, it should come as no surprise that he’s let a cold-blooded killer into his locker room; I would have thought that the strip would have worked up to this with maybe a little light drug dealing first, but heck, why not just go for the gusto right away. I can’t wait for the cops to come question Coach Thorp about all the bodies only to have him reply with a resounding “Eh.”