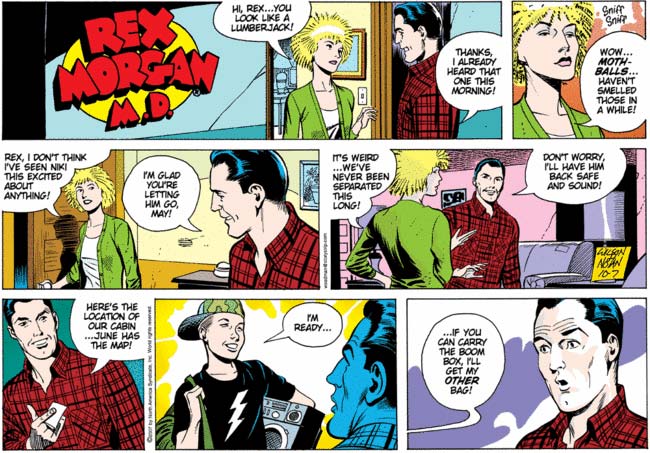 More often than not, when I mention to people that I’m a fan of Rex Morgan, M.D., and similar strips, it completely boggles their mind. “But how can you force yourself to read that boring crap day after day?” is generally the sort of thing they ask me. Days like today are the payoffs that keep me going. Sure, the final panel, with Rex going into such paroxysms of shock and horror that his face is about to collapse in on itself, would be hilarious even without context, but you really need to backstory to appreciate all the other psychodrama going on here — everyone’s sneering at Rex’s mothball-scented bid to match his father’s rugged outdoorsmanship, and Niki blowing the whole thing to bits with his city-kid need for creature comforts.

In a conventional narrative, Rex and Niki’s initial antagonism on the trip would eventually soften into mutual compromise — Rex would wow Niki with his fly-casting skills, and Niki would teach Rex hip youth-culture lingo like “radical” and “extreme”; and maybe Niki would help Rex understand why the good doctr needs his dead father’s approval so badly, and that a situation where one is waist-deep in water and short on food isn’t necessarily a Katrina survivor’s idea of fun. But this is Rex Morgan, M.D., a strip whose hero never even tries to grow as a person or engage in a single moment of self-reflection. Niki will be made to hate fishing every bit as much as young Rex did, only to try to force it on his own son years later for reasons he can only dimly grasp. Thank God Sarah Morgan was born a girl, and is thus forever safe from Rex’s relentless Pygmalionesque schemes. 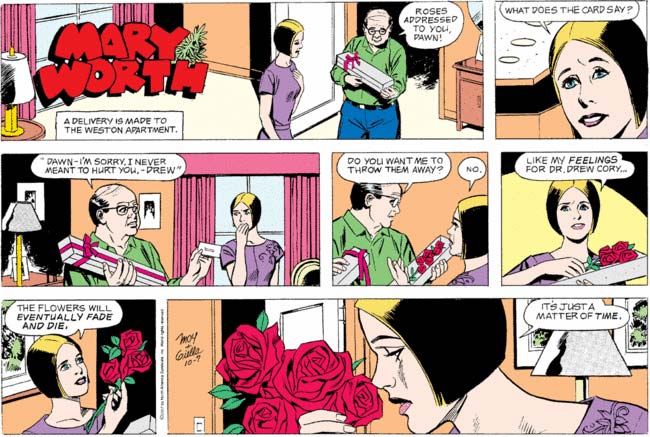 And sometimes the hoary old soaps can deliver perfect moments of emo pathos. I have to admit that, while the grinding gears of Mary Worth plot changes are generally audible from miles away, I’m not sure whether this is meant to be a capstone on l’affaire Drew or a setup for more heartstring-pulling to come. Either way, though, I’m going to enjoy imagining these roses sitting on Dawn’s dresser, withering more and more each day, but staying in their vase until they’re reduced to a skeletal mess, and Dawn seeming to draw more and more strength from their death until she’s more powerful than Drew could possibly imagine. 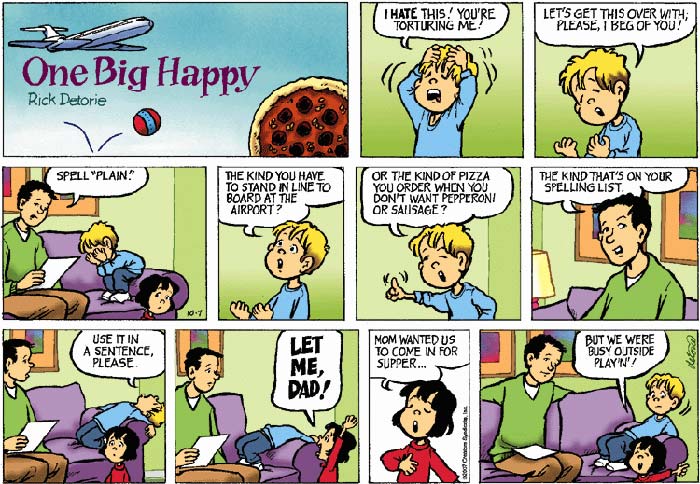 Ha ha, this is some of the most dick-tastic dad action in the funnies since — well, since Rex Morgan. One could argue that the point of a school-assigned spelling lists is to teach children how to spell, not how to memorize arbitrary lists of words just long enough to pass a test, and that we should be impressed that Joe has actually managed to get his little pea brain around the concept of homonyms. But then we wouldn’t have gotten to see Joe squirm about in his usual learning-avoiding contortions. Dad’s shown himself to be more of a math guy, anyway. 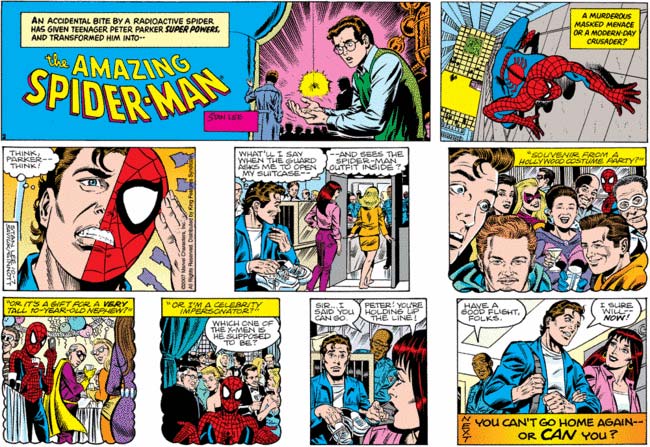 This strip is notable solely for panel five, which contains a passable likeness of Leonardo DiCaprio that apparently absorbed all of the artist’s celebrity-drawing abilities, as nobody else at this “Hollywood costume party” is even remotely recognizable as someone famous. But while I’m here, I might as well point out that this is yet another example of the most irritating weapon in Spider-Man’s narrative arsenal: the dilemma that solves itself in a day or two with no intervention from the protagonist whatsoever (see here for a particularly egregious example from a couple of years ago). In this light, it’s probably impossible to believe that the typically dramatic NEXT! box will live up to its promise. “You can’t go home again — or can you? Oh, wait, actually, I was right the first time. It turns out that you can. Never mind!”