I know I’ve been busy this weekend, but that doesn’t mean I didn’t diligently choose a COMMENT OF THE WEEK!

“Johnny goes through mustache wax like it’s going out of style. Which, coincidentally, it did, about 125 years ago.” –Tweeks_Coffee

And bravo to the runners up as well!

“I fear Judge Parker is leading us to a modern update of The Day the Earth Stood Still. Nuclear weapons are no longer the threat — now Klaatu/Sophie tells us, ‘Your climate is changing’ and warns us to mend our ways. But no, we won’t listen. I give it two weeks before Keith and his idling Hummer are destroyed by a rampaging Gort.” –dbp

“There are so many things out there that harm our youth today: drugs, guns, gangs, pasties flashed during the Super Bowl, Pokemon, that damn rap music … But it was hubris that took down poor Mike Patterson. Hubris, that overweening pride, that indomitable narcissism. Alas, poor Michael Patterson. Today I lay you down in a loamy grave with a foobish shovel. Rest in peace, young hooligan. The living do, indeed, bury the dead.” –Broken Skittles

“Vengeance? After witnessing plugger sex? Don’t be silly. You know full well you’ll be in holding yourself in the corner of a dark, cold room, whimpering softly and crouching in a puddle of your own tears.” –SNF

“‘There doesn’t seem to be any serious damage.’ YEAH, BECAUSE WHEN THERE IS, YOU USUALLY HEAR A KIND OF GRINDING NOISE WHEN I DO THIS TO ITS HEAD.” –SmartPeopleOnIce

“But now, I think [Mary Jane]’s about to emerge as an unexpected supervillainess. There’s a giant exoskeleton hidden under that bulky, unattractive, totally not-MJ sweater. Soon she will emerge as … The Lavender! Or … The Twin Set! Or … some other lame-ass Spidey comic strip type villain.” –Deborah

“You couldn’t find Exit 163B, and it was marked with big green signs. Good luck finding the g-spot, Casanova. Hopefully there’s a copy of Our Bodies, Ourselves in the glove compartment.” –Joe Blevins

“The vet is totally putting the moves on Mary. (Ew! Ew! EW!) I don’t know if the funny pages can handle a Mary Worth who’s not having sex with TWO doctors at the same time.” –Meanwhile

“Could Mary Worth possibly be any more virtuous if she tried? She oozes moral rectitude from every pore of her unwrinkled flesh.” –Moss_Moses

“Marshmallows fresh from the back pocket, mmm yum! And their body heat will melt them to the degree they will be flat, sticky, and covered with pocket lint. Lint is like candy sprinkles to a Keane kid.” –True Fable

“At first glance, I thought the Family Circus kids were taking shots. Maybe they’ve invented some new drinking game where every time one of the kids says something banally funny you take a shot … or 12, depending on how much it hurts your soul.” –Chesnut

“I’ve gotta say, the sudden spurt of TDIET submissions based around the hospital leads me to hypothesize three equally depressing, yet equally likely theories: 1) the readership of the strip has a collective perpetual foot in the grave, 2) lonely, miserable, bedridden hospital patients have no better way to wile away their hours than to doodle comic strip ideas on the back of their napkins and sigh about lost time, or 3) the readership of TDIET frequently find themselves in the hospital due to the high blood pressure brought on by complaining about every last damn thing.” –Tats

“Mary’s face in panel two is like Christmas. It’s like her response to ‘All creatures great and small deserve our compassion’ is ‘I am familiar with this technique of saying things you can’t possibly mean in the most obsequiously bland way when you’re really about to wreak bloody, bloody vengeance upon themandohmygod, the vet and dog are GOING TO KILL ME. HELP. HELP. HELP.'” –kitty

“The reason you don’t see Sally’s mom in too many strips: she can’t stop looking at the camera. Notice that as it swoops around the pair from one side to the other, in the second panel the mom leans sharply to her right so her face doesn’t get blocked out. What we’re looking at was the nineteenth take, after the frustrated director walked off the set and the editor had to just pick the least awkward shot.” –Sobek

“I’m pretty well convinced that ‘Mitch’ is actually a young Slick Smitty. They both have the same stupid haircut and the same stupid grin. I keep expecting to see a narration box pop up: ‘Slylock Fox suspects that Mitch is lying through his teeth. What evidence suggests that he is not being honest about the iPod?’ And then an upside-down narration in small print: ‘Answer: Mitch has come to a bookstore for a meal, which clearly demonstrates that he has no understanding of how the traditional commercial system operates because he does all his business on the black market.'” –praepes

“In Bull Malone’s defense, both the kid and his boat are done up entirely in low-visibility marine camouflage and embedded in a dense cloud of waterfowl. Bull might just not have seen him. Avoiding the collision at the last second was plain good seamanship. And when he finds two guys standing on the dock, twiddling their thumbs and watching their precious vacation time tick away as they wait for someone with a boat to come along and take them to a hunting and fishing camp, what is he expected to do — leave them dangling there until Malotte’s kid finally shows up with ‘most of the water’ out of his boat, or extend some customer service and offer them a ride himself? Bull is just showing good business sense, I say. Sorry, Johnny Malotte! The cutthroat, take-no-prisoners environment of wilderness resort competition is no place for the likes of you. Good thing you have so many kids; the strong market for healthy kidneys should keep you going for a while.” –Joe Btfsplk

“Eventually, Wilson & Barreto are just going to spin off a strip called Trudy’s Ass, aren’t they?” –Keg of Curd

“I didn’t think Mary could be any more insufferably full of herself until she decided to award herself a goddamn Nobel Prize for bringing a dog to the vet.” –rhymes with puck

In other news, I’m sad to see Mark Trail Theater come to an end, though it was a fairly exhausting weekend. Faithful reader Little Red-haired Girl and her husband (aka our neighbors Kathleen and Emil) where very kind to bring us roses at the final performance! Here I am showing them off and looking pleased but zonked out: 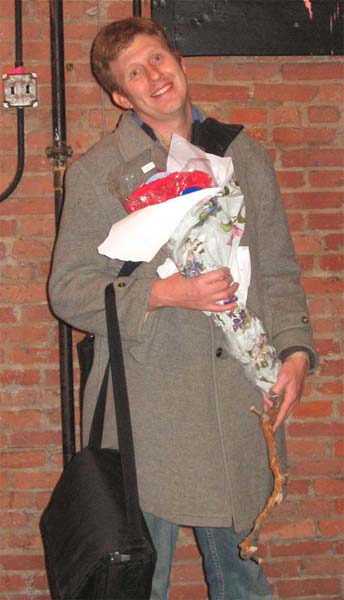 Yes, I shaved for the performance — after all, I wasn’t playing a villain and I didn’t want Mark to start punching me uncontrollably. And that stick was an important prop! I did get to chat with several faithful readers — Minivet, Susie, and Nellie — at the Saturday shows — lovely people all! Anyone I missed talking to, please speak up in the comments! And now I’ll shut up about it all except to say that it was captured on video, and if all goes well I’ll upload it to YouTube sometime this week, at which time I’ll go on at great further length.

Oh, and before I sign off, I need to direct your attention to the the FOOBiverse Journal, that home for vitriol against all things FBOFWish, where the blogger all last week was none other than faithful reader True Fable, who, if he said anything about it here, I’m very sorry to have not noticed it.

And finally, I must as always throw some love at our advertisers: