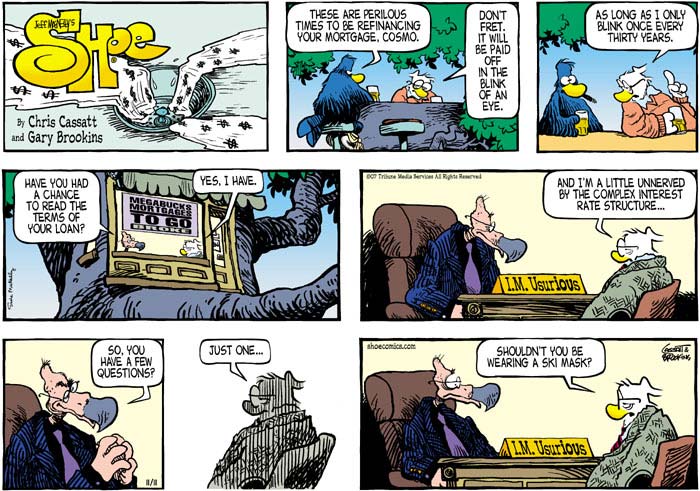 “These are perilous times to be refinancing your mortgage, Cosmo.” Ah, an auspicious beginning to any light-hearted journey into the Sunday funnies! But at least the Perfesser’s encounter with his mortgage lender is fairly straightforward. See, his name is “I. M. Usurious”! Which indicates that he is usurious! Ha! It’s a sharp and subtle commentary on modern mores. He’s also a buzzard, you’ll note. Because banks metaphorically feast on the flesh of the dead and dying, you see! (Or is it metaphorical? The world of Shoe, so much like ours but with anthropomorphized talking birds, always straddles the line between metaphor and nightmare.) 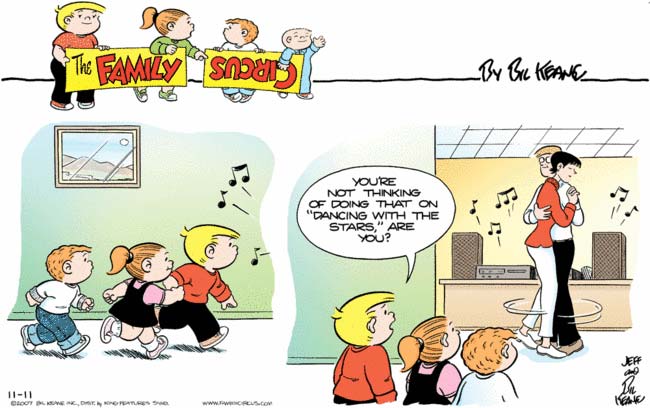 The post-modern emotional desert in which the Keane kids gasp for sustenance is starkly illustrated today, as they can only interpret mom and dad’s attempt to have a genuine moment of romantic intimacy through the lens of the horrible pop cultural products of late-stage capitalism. A more realistic thing to shout at them might have been, “Hey, no getting frisky, you two! You can barely afford to feed all of us now as it is.”

And, just for the heck of it, let’s check in to see what’s going on over in Rex Morgan, M.D.!

On second thought, maybe let’s not.