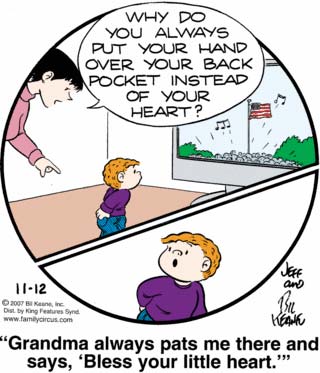 Christ almighty, what is the deal with the Keane kids and their asses? Someone needs to explain to little Jeffy the basics of literal and metaphorical human anatomy, pronto, before he starts complaining about a “broken heart,” “offering up his heart” to his first love, “wearing his heart on his sleeve,” and other scenarios that don’t even bear thinking about it.

When I first saw this cartoon, I thought Jeffy and his mom were looking out the window, and that a spontaneous act of Veterans Day (Observed) flag approbation was going on in their front yard. This could have made Jeffy not just stupid but dangerously stupid, as the gathered vets might have thought that he was bringing shame to the flag with his ass-clutching and decided to beat him up. This of course would have been hilarious, especially if some of the really old guys had taken the lead (imagine him being held down by a couple of 73-year-old Korean War vets while an 84-year-old comes at him with the same bayonet he used at Guadalcanal). However, since they’re actually watching the Patriotism Channel on their enormous flat-screen TV, Jeffy is only shaming his household, which is nothing new.

The sight of Slylock dickering with some kind of smallish mammalian taxi driver (a monkey, maybe?) over cab fare while the as-usual moronic bunnies stare on dumbly is probably the funniest thing I’ve seen today. I would say that the taxi driver’s sudden attack of deafness is less “a mystery to be solved” and more “the driver being kind of a dick.” On the other hand, maybe there’s some history here that we’re not privy to. (“How did Murray Monkey know that he should give Slylock the incorrect change? Solution — Because the cheap bastard never tipped on any of his previous trips to the airport, and his picture is taped to the dashboard of every cab in town.”)

I know that Max is clambering into the trunk to get out the comparatively enormous suitcase because he can’t actually reach it from the curb, but I’d like to imagine that Slylock and/or the driver actually made him ride back there for the entire way. “Sorry, Max, no rodents in the car!” 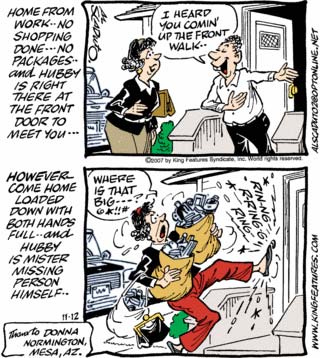 Who’ll do it every time? Why, Comics Curmudgeon readers, of course! “Donna Normington” is really none other than our own Mountain Momma. I have to say that I’m impressed by her limber nature — I don’t think I could ring the doorbell with my foot while carrying two bags full of groceries! And I hope her hubby appreciates his buck-toothed caricature.

Whoa, check out those tiger-striped suspenders on Lem! Hot. HOTT. This is what happens when the International Male catalog starts delivering to Hootin’ Holler.

And finally, I leave you with a stunning find from faithful reader Jym. In his own words:

On October 10, 1987, I encountered what I recognized as the Rosetta Stone of Mark Trail strips. A young motorcycle hooligan had disrupted a teen-themed outdoor adventure with his infernal racket, but we got some inkling that he maybe wasn’t all bad. This strip showed us exactly what he needed to do to reveal himself as a worthy citizen.