Well, faithful readers, it’s that time of year again: the time where I go on a multi-city Christmas traveling trip! Since so many folks are traveling or spending time at home and away from the Interweb this time of year anyway, I hereby give all of you the next 10 days off from reading my site. I’ll be back on January 1! Or possibly January 2. We’ll see what I feel like.

But I can’t leave you without offering the comment of the (truncated, once again) week!

“Mary Worth will seem more exciting if you hum the riff to ‘Barracuda’ under your breath as you read it. I mean this specifically with respect to the ‘two small dogs very, very gradually approaching one another’ storyline, but I suppose it would work any time.” –Keg of Curd

And, of course, there are runners up:

“On the contrary, Eric has long dreamed of a Han Solo proposition scene. It’s just that, well, he was dressed as Han and making the proposition, and Margo, his crying sister-in-law, or some random hooker was dressed as Princess Leia. The look on his face is the look of a man who’s just realized that his innermost fantasy is coming true, only it’s the wrong kind of proposition and there’s a slave girl outfit that’s just not going to wear itself.” –Jp

“Knowing nothing about football or the terms involved, I have no way of envisioning the game based on Marty’s speech. Based on the drawings, I’m going to go ahead and assume that football is another word for ‘line dancing.'” –Rhekarid

“So, um, Mark now wanders around talking to his dog and putting things he finds on the ground in his mouth? There’s people around here who do that. We call them ‘the homeless.'” –SmartPeopleOnIce

“Okay, now I get it. Remember the concern with Rex being ‘disappointed’ in Niki? Apparently meth-mom got wind that Rex was planning an overly elaborate sting for Niki in the woods. You may be thinking too overly elaborate but remember they spent about 8 months with trout metaphors.” –Sans Sense

“This is why I don’t read Marmaduke. It makes me go fetal in despair.” –The Avocado Avenger

“Spider-Man, Spider-Man, does whatever a spider your nephew can.” –The Waz

“MY REPORT ON SIMON KRANDIS by Spider-Man Peter, Age 30. Simon Krandis is a mean old man who lives in a big house with a guy in a green suit and orange tie. He doesn’t have any wife or kids and owns a newspaper or a TV station I think. He is big and fat and probably smells bad. One time Simon Krandis wanted to date my wife so he sent The Persuader who is the guy who keeps blowing up our delivery trucks to talk to her but she hit him with something and now hes probably all mad. I looked for him on Google but didnt find much that wasn’t some stupid blog about how bad comic strips are.” –Inspector Dim

“Obviously neither of these women have had their dogs for very long. When the dogs meet, the owners just yank on the leash, smile politely to the owners, chuckle and walk away. You do not allow the lady in heels and the tight clothing to fall down, then predictably spend the next two months fixing her life’s problems.” –Charles

“What Mary Worth is doing with her hand in panel one is wiping off a stray piece of salmon-colored lint that somehow landed on the shoulder of her more exquisitely wretched puce pantsuit. The exclamation mark she utters in panel two is surprise that a salmon-wearing harridan would dare speak to her, especially after the lint incident.” –Electro

“Normally, I wouldn’t condone using a leash to throw a dog like a yo-yo. But then, normally, it isn’t a yip dog being thrown at Mary Worth in Chairman Mao’s pajamas.” –kitty

“Pity the poor chihuahua lady, because today she has made a powerful and unbelievably petty enemy.” –Trilobite

“Peter Parker: ‘It’s tooo harrrrrrrrddddd. Waaaaaaaaaaa!’ MJ: (says something about an event important to her that, if Peter had paid any attention to what she says or does at all, he would know about) Peter Parker: ‘Huh? Nooooooo! Meeeeeeeeeeee!’ Really. Must. Stop. Reading. Spider-Man.” –Girl Reporter

Oh, and hey there! Here’s a fine picture of faithful reader Dave (of TDIET fame from earlier this week) and his son Clifford at the Baseball Hall of Fame! Dave is sporting his fine Margo Warhol shirt, which as always you can purchase for money from the Comics Curmudgeon store. 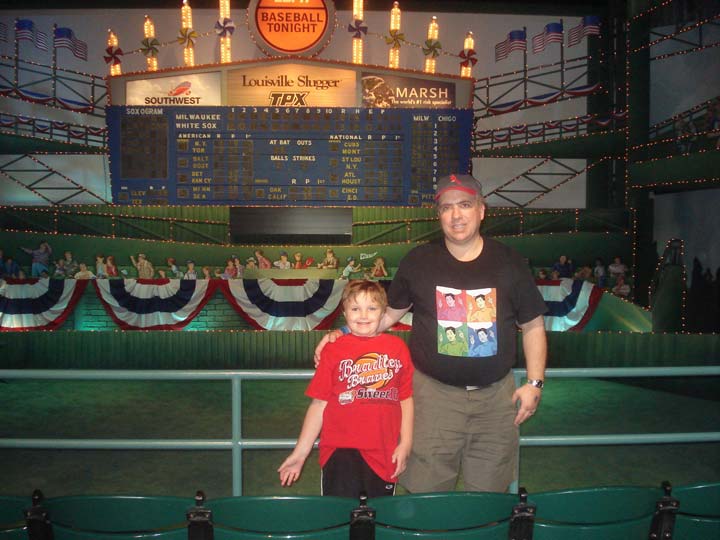 Dave also sells his own homeroasted coffee beans (you may have noticed the ads around the site). 100 percent of the money you spend on his coffee benefits the Batten Disease Support and Research Association, so check it out!

Speaking of ads, we must as ever give thanks to our advertisers:

This next bit is NOT an ad, but a genuine unsolicited recommendation! If you’re looking for a cool comic (on paper, not this Internet crap), I urge you to check out MariNaomi’s Estrus!

And finally, here’s a little talker to keep you entertained in my absence. My wife spotted a comment on a Defamer.com story about a new Catherine Keener movie featuring women living in a NYC apartment building that suggested that Keener would make a perfect Margo from Apartment 3-G. (I would bet that said commentor is almost certainly a reader of this site, but never mind that for the moment.) What current and/or former movie stars would you cast as you favorite soap strip characters? Discuss, and I’ll see you in 2008!