Ho ho ho, old lady! Soon your beloved new pet — the only living thing that can still stand to be around you, or the only one that can’t flee, at least — will be torn away from you and then you’ll be ALONE, ALONE, ALONE! Ha ha ha! Holiday greetings!

So, I’m back! Sad to say, I haven’t even caught up on the comics yet from my visit — I have no idea what’s going on with Chester’s Choice and the Damn Brownies and Liz and Anthony’s Half-Hearted Christmas Eve Lovemaking and OH MY GOD THE CURTIS KWANZAARAMA! I had to have my attention drawn to the Christmas Day gem above by a link on the Shortpacked! blog. Showing how much the Shortpacked/Comics Curmudgeon readerships are overlapping, here’s this random picture of Finger-Quotin’ 20th Anniversary Optimus Prime from faithful reader Stewart Dean! 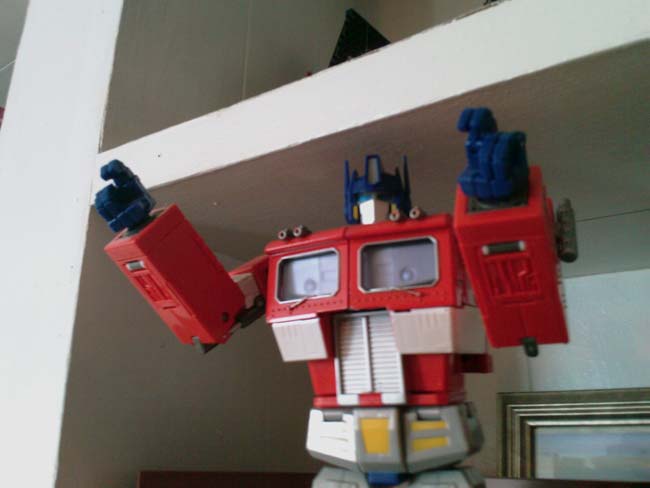 Er. So, how did your Christmas go, faithful readers? Get any good loot? The comics-related elements in my haul included the awesomely named Art of Ill Will, a book on the history of political comics, which I got from my dad. More visually intriguing was the following gem: 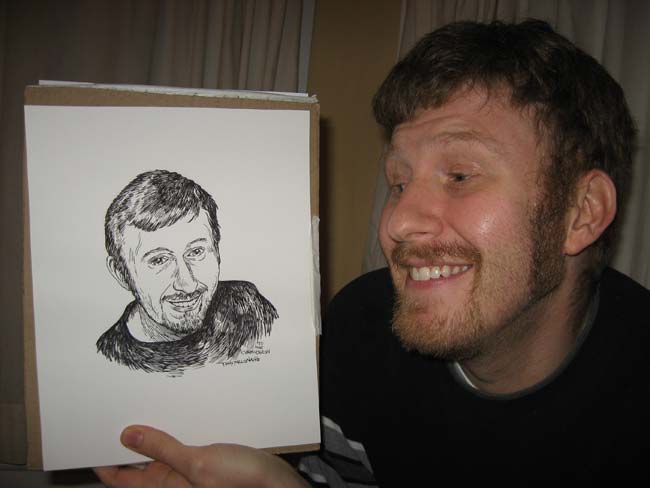 There’s nothing better to give a young narcissist than the gift of ME! This fine portrait was drawn by cartoonist Tony Millionaire, the guy behind Maakies and Sock Monkey. Mr. Millionaire was involved in a Christmas original art swap with Alison Bechdel, of longtime Dykes to Watch Out For and more recent Fun Home fame. Ms. Bechdel, whom I met once in NYC earlier this year, said:

I kept racking my brains, trying to think of someone who’d really, truly appreciate a Tony Millionaire portrait of themselves … but to no avail. Then I was looking through my iPhoto pictures for some reason, and ran across a couple I’d taken of you at MoCCA in June. And I thought, Of course! The Curmudgeon!

My heart was extremely touched! And my head got slightly bigger! I thought I’d share this picture with you before I permanently installed it on the ceiling above my bed.

But hey, enough about me! What about your late December extravanganzae? I know for a fact that at least five of you were celebrating in style, enjoying a Comics Curmudgeon meetup in the Big Easy on December 26! 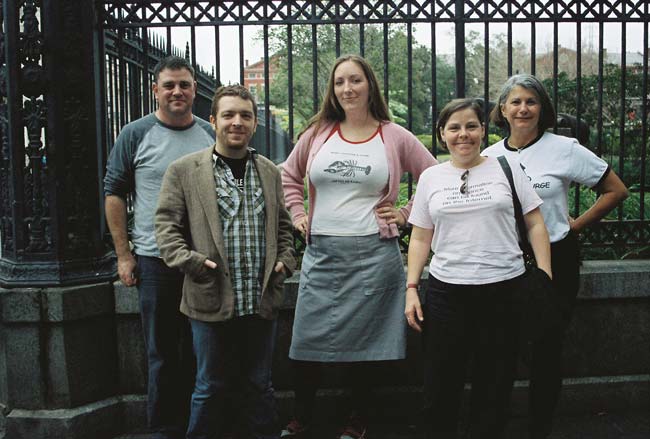 From left, that’s faithful readers Big Sims, Shannon, Non-Shannon (in Chopstick Technique gear), Bootsy (in Search Advice gear), and Trotzenbonnie (in partially obscured the Urge gear). I love this picture so much. Don’t they look like a team of superheroes in their secret identities? Or perhaps a rag-tag gang of misfits, each with a unique skill, called together to rescue the kidnapped president, or perhaps rob a high-security vault full of diamonds?

In the next picture, you can get a better look at the Urge shirt, and see that the circle at the base of the arrow does not in fact center over one’s nipple as some feared. Also, Trotzenbonnie and Shannon look awfully calm considering they’re right next to some kind of horrifying FBOFW-branded demon-eyed doll thing. 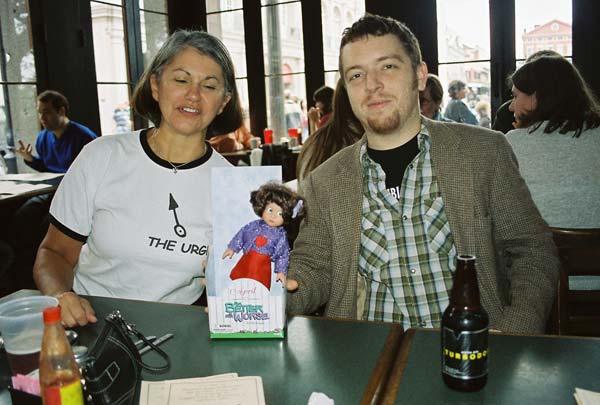 I also got the following note and picture:

Latest CNN hero Steve Peifer sends his greetings before he departs to Kenya. He’s your biggest fan in Africa. See more at CNN’s Web site. One may wonder why he is writing in third person, it’s because his amazing son is writing it!!! 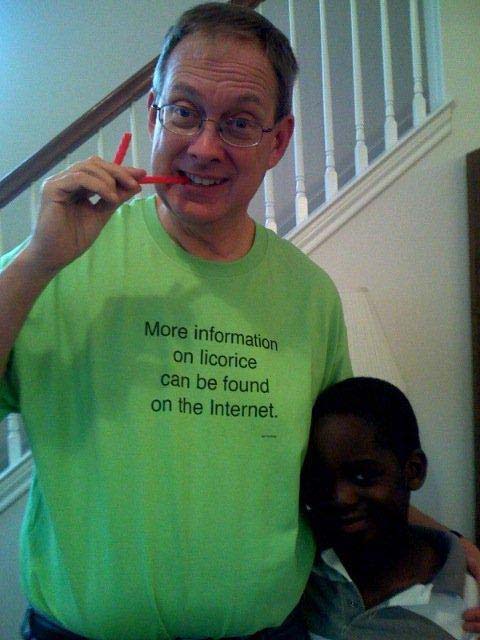 No word on whether Steve is baffling the children of Kenya with his Mark Trail-themed shirt as he arranges for food to be available to them in their schools. A shout-out to you, Steve!

Also! Through means that I’m not at liberty to disclose, I am able to share with you some Christmas pictures from another Comics Curmudgeon regular. Here’s the Galactic Emperor Chennux attempting to magmacannon Chucky, the Fiber Optic Snowman. 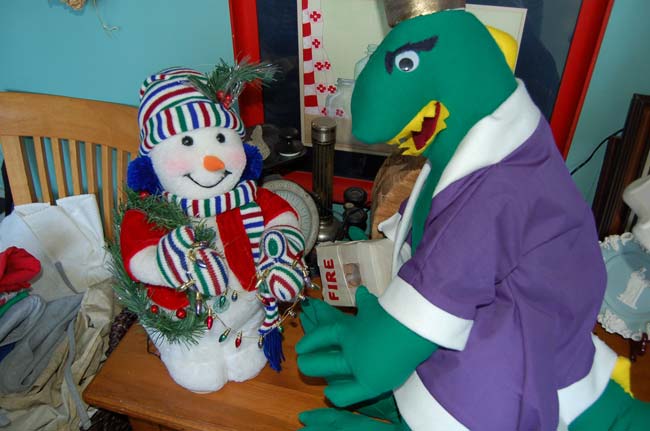 And here his Imperial Loudness enjoys a simple Zynexian feast of potatoes and syrup prior to skxcritort deployment. 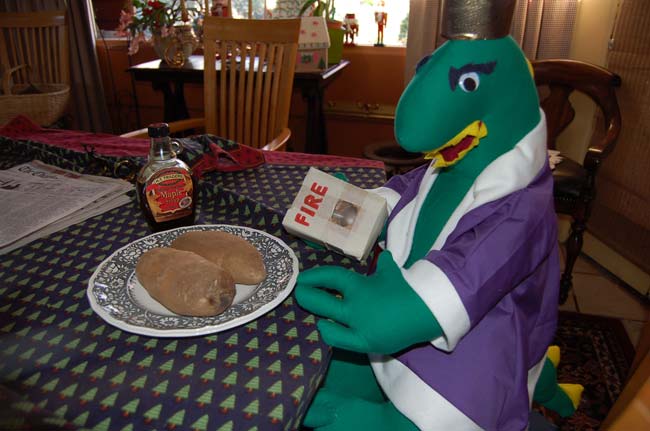 And! While I must sadly pass over most of the comics that ran while I was on vacation, I am obliged to linger over a couple of TDIETs that appeared during my absence. The first comes from an idea submitted by faithful reader HBGlord: 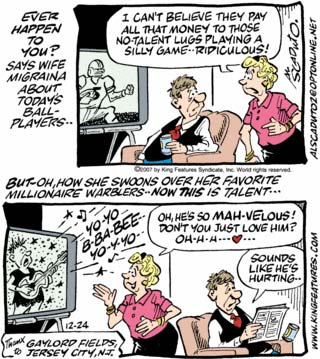 The second is from faithful reader Matt Brauer. I particularly enjoy the look of real anger on little Ragweed Jr. as he attempts to bludgeon his sister with a baseball bat. 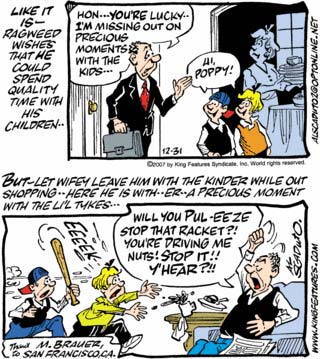 Real comics from yours truly … tomorrow! Meanwhile, I shall let Keg of Curd rule the COTW roost until next Monday, but for now we must give thanks to our advertisers, yes we must.