I’ve managed to go several weeks without mentioning Dick Tracy, and that’s because it’s been stupid and incomprehensible and insane. The meandering, pointless storyline has involved a maniac holding the governor hostage in an old haunted mansion at the end of a tunnel behind a painting; meanwhile, a wrecking crew has shown up to demolish the house the same day that a high-profile charity haunted house sleepover event involving local politicians is ostensibly in progress inside, and they refuse to obey the orders of the police. Today’s comic is worthy of mention, though, because it features the bad guy (or maybe the governor — I’m not entirely clear on this point) falling to his death, a mighty SPLATT ringing out as his organs are pulped inside his body cavity; then his corpse is mangled by a bulldozer, which the operator of said machine barely notices. I would bet money that this strip runs in at least one newspaper that pulled Zits last month because it used the word “sucks.” 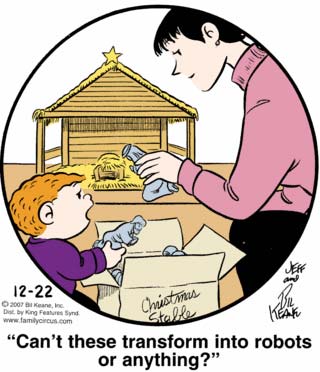 This sort of blasphemous sass that should definitely not bring a wry little smile to the lips of the mother of any ostensibly Christian household. Mommy needs to get out the crucifix and use it to bludgeon the devil out of her sinful son.

Hmm, pot brownies should really leave Abbey “inspired” to do little more than sit in the office and giggle about all the clashing color schemes she keeps coming up with. New theory: meth brownies.

You know what America needs more of? Superheroes that pick up criminals by the scruff of the neck and then punch them in the face.