Today new Gil Thorp artist Frank Bolle met his first real challenge. I’m not talking about panel one, in which three Lady Mudlark hoopers decide, in the apparent total absence of an opposing team, to play against one another; and I’m not talking about panel two, which depicts Lisa Wyche apparently being dropped from a great height directly onto her wrist. Those are just par for the course over at Gil Thorp headquarters. No, just as Eduardo Barreto’s trial by fire at Judge Parker came when he first grappled with Abbey Spencer’s sexy red mullet, so Bolle must eventually confront Gil’s epic flattop head-on. And … it’s a punt! It’s only your third day, so we’ll let it slide, Frank, but you can’t hide behind word balloons forever.

I’m not sure I approve of Gil’s new face — not angular enough, and a little too much like Robert Mitchum and/or Rock Hudson, as several commentors noted. I do, however, approve of Mimi buttoning up what appears to be one of Gil’s shirts, implying that we’ve just missed some red-hot Coach-Thorp-on-Coach-Thorp action. During which, apparently, they were talking about Lisa Wyche’s wrist injury. Obviously.

So, earlier this week we learned that Marvin’s mom is unable to continue her career as a romance novelist because caring for Marvin has left her unable to even imagine what passion and sexuality might be like. (By the way, did any of you know that Marvin’s mom was supposed to be a writer? I didn’t, and I’ve read the strip every damn day for the last two and a half years.) As a result, she’s given up on the romance genre and instead decided to churn out a series of pregnancy-themed sub-Foxworthyisms called “Belly Laffs.” In an act that profoundly blurs the line between narrative structure and narrative content, the Marvin strip itself will similarly follow her down the road towards an easy paycheck; in the first entry in the series, the strip boldly proclaims its intention to phone it in by showcasing not one but two panels consisting a pregnant woman from the neck down and nothing else.

By the way, anyone who’s see Marvin in action knows that Jenny drank while pregnant, and heavily. 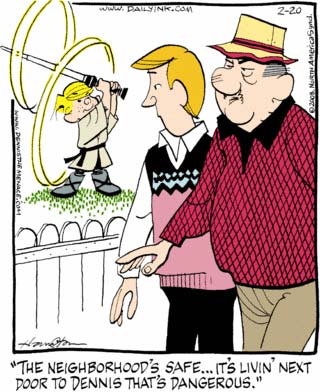 I know it’s one of my jokes that Dennis isn’t very menacing these days, but at least once a week I goggle at his completely nonthreatening antics — he pushes “the best things in life are free” treacle! he offers seminars on Polynesian sociolinguistics! he launches public health campaigns! — and I think, “OK, that’s it. He absolutely, positively, can not get any less menacing than this.” Then, of course, came the Star Wars cosplay.