For the uninitiated, panels two and three are a good introduction to our gal Magee, revealing her to be a lovely and charming combination of Hermann Göring and P.T. Barnum. I wasn’t even aware that Lu Ann had shared her deranged oxygen-deprived series of hallucinations (or were they hallucinations? DUN DUN DUNNNHHHH) with her roommates, but assuming she did, it’s not at all surprising that Margo would chose to use that knowledge to publicly humiliate her for financial gain. The great thing about exploiting Lu Ann is that she was already kind of dumb even before the carbon monoxide poisoning played hell with her memory, so Margo can just claim that she’d already signed off on this publicity campaign months ago and she’ll probably buy it.

THE FACE, MEREDITH, GO FOR THE FACE! I love how quickly Mike has given up hope of stopping his progeny from battling it out with razor-sharp kitchen utensils; now he seeks merely to level the playing field. I’ll give this to him, though: just one afternoon where one of his kids blinds the other one and he’ll never be left in charge of them by himself again. 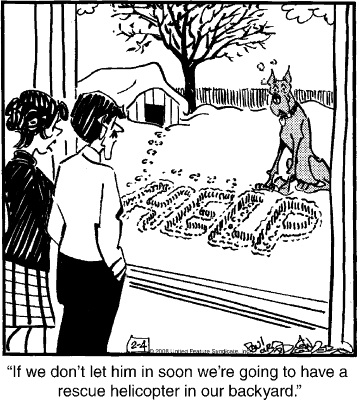 I have to admit that I had always assumed that, when Marmaduke finally mastered the English language, he’d be a lot more threatening in his use of it. For instance, I’d have imagined that what he’d have written in the snow here would have been more along the lines of “YOU HAVE TO COME OUT SOMETIME AND WHEN YOU DO YOU’RE MINE.”