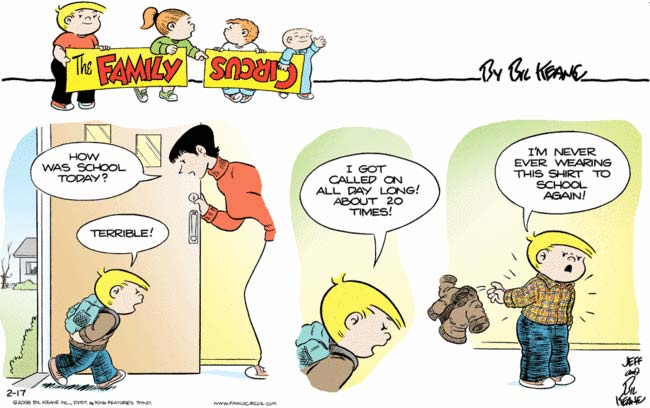 Everything those fussbudgets who testified before Congress in the 1950s about the evils of the comics industry and how the comics were rotting the tiny brains of America’s youth said was true, because I used to be a pretty smart guy who got a graduate degree in a useless, esoteric subject and now after three and a half years of doing this blog I apparently can’t even figure out the freaking Family Circus. Why did Billy’s hideous multihued plaid shirt earn the unwelcome attention of his teachers? Since they surely haven’t bothered to learn the names of their interchangeable moppet charges, you’d think they’d probably call on kids by saying “Hey, you in the blue” or the like, and would rather pass the eldest Keane kid over rather than hazard a guess at what to call that monstrosity of a garment. It’s possible that someone on the faculty is epileptic, and when Billy says he was “called on” he merely means that he was ordered to cover up lest he induce a seizure. 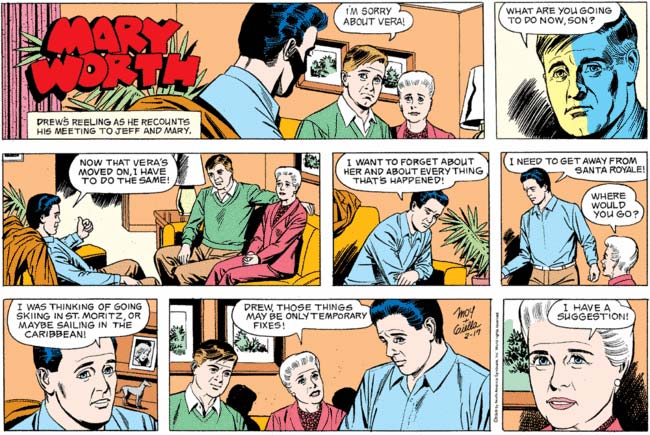 “If you want to resolve this permanently, Drew, why don’t you just go straight to hell? You’ll wish you did, after hearing my advice!”