Let’s not read too much into Toby’s use of “compulsion” in panel one — I’m pretty confident we’re not going to go much deeper into Mary’s psychology than “my true religion is kindness” or some such claptrap. Some backstory would be a refreshing change, though, full of sailing vessels, crinolines, “prithee”, witch trials, a narrow escape from the stake, a stark struggle for survival through the icy New England winter, and encounters with wolves that prove to be more than they seem. . . .

If I’m not mistaken, this is the first post-jump Funky with a focus on the kids instead of their sad sack elders. Nice start! So let’s overlook the apparent continuity error on Opponent McHeadband’s jersey for now. Instead, look at scrappy Summer Moore there, giving as good as she gets! I gotta ask — where’d she get that from? Surely not everybody’s favorite Utility Victims, Les ‘n’ Lisa! Whose kid is she — I mean, really? Let’s watch as the dark secret emerges, only to grind the last particle of joy from Les’s trudge to the grave. 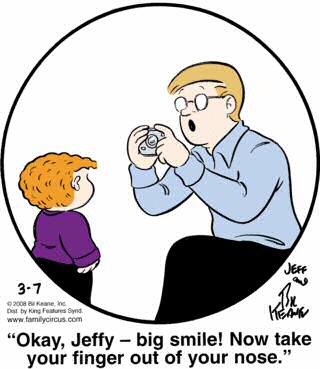 On March 7, 2008, Jeff and Bil Keane finally decided that phoning it in was just too damn much work.