Hey, everybody! I’m back from sunny Tucson (where I met up with Bob Weber, Jr. and a DELIGHTFUL group of readers — pics coming in a bit). I must give props to Uncle Lumpy for his fine filling in, and a huge thanks to everyone who gave money during the pledge drive — you’ll all be receiving individual thank-yous over the next day or two. After catching up on the most crucial storylines (Mary Worth flashback? OH MY GOD I THINK I JUST WET MYSELF) I confronted today’s comics and found nothing but sleaze and personal degradation.

There’s an entire Women’s Studies thesis waiting to be written about the Foobs today. Elizabeth’s abject terror and panic that Anthony will think she’s a two-timing ne’er-do-well would be hilarious if it weren’t so pathetic and queasy-making. The fact that Anthony isn’t being a total douche for once (“Gosh, sorry you’re terrified about being caught alone with a man after sundown … I didn’t realize that this phone could call the 19th century”) just makes it ickier. Presumably Liz will agree to Anthony’s inevitable proposal to “make it up for him,” setting a firm foundation for a future life of quiet desperation and self-loathing.

Niki, of course, isn’t a literal whore; no, he’s an ethics whore! You have to admit that there’s something pretty skewed about the moral hoops the strip made him jump through to get his sweet payoff, which, if you haven’t been following, went something like this:

BANK ROBBER: Hey, kid, even though you’re cute and ludicrously clean-cut, I can tell you’re from the streets, like me. Here, take some stolen cash!
NIKI: No way, Mister! Rex Morgan is keeping me on the straight and narrow! [Surreptitiously takes cash anyway. Later…]
NIKI: Rex, I … took some of that stolen cash! I know it was wrong!
REX: It sure was, Niki! Lucky for us, we’re about the freeze to death and can burn it for heat!
SHERIFF: Son, you sure did a great thing by helping catch that bank robber! Here’s some reward money!
NIKI: Sorry, sheriff, I’m wracked with guilt over the stolen cash I stole and then burned! I can’t accept the reward!
ANONYMOUS DONOR: Son, you sure did a great thing by turning down that reward money! Here’s some reward money! Plus a college fund, which is more virtuous than cash, since you’ll just spend the cash on hoodies and hair care products!
NIKI: Wait, Rex, even though it was wrong for me to accept the reward money, is it right for me to accept this meta-reward money?
REX: Who the hell knows? I’ve been drunk for hours! 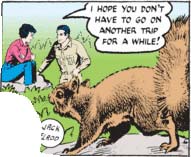 Yes, Cherry, we know how you like to keep Mark at home! And we’re sure he won’t be going anywhere for … you know, a while …

Ha ha, Cherry! Now that Mark has finished up his thrice-annual marital intimacy with you (on a rock, as is his wont), he’s going to head out to “present an award for the magazine,” if you know what I mean! No, wait, this is Mark Trail we’re talking about, I’m sure that just means he’s actually going to present an award for the magazine — presumably getting a plaque from a raven-haired, all-tan-clad outdoorsman is the equivalent to getting a Pulitzer in nature journalism. Anyway, Cherry, you look to be getting along fine with Andy in panel two; you don’t need Mark at all! 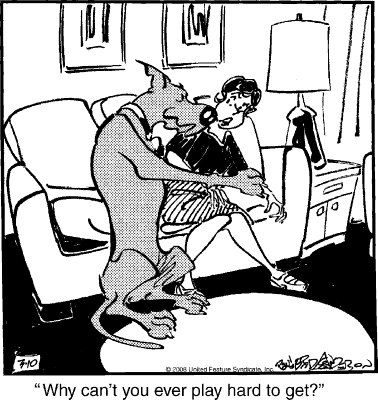 And speaking of getting along fine with our four-legged friends … wait, you know what? I don’t think I can handle this on my first day back. I think it might be the kind of thing you have to build up to.