Yes, you might say poetic justice, if in fact there were any poetic justice in the situation whatsoever. I suppose Cole Lector was rich, but it’s not as if Dab Stract or the police are going to be handing over his money and geegaws to the poor now that he’s been killed. In fact, the whole notion of redistribution of wealth ought to make Dick so righteously angry that he’d grab that Red bow out of Dab Stract’s hands and break it over his knee, just like he would snap that Commie Robin Hood’s spine, if he could lay his hands on him. The only possible answer is that Dick is not in fact listening to a word Dab Stract or anyone else is saying, and is just interjecting random tough-guy bon mots whenever he becomes vaguely aware that there’s a lull in the conversation. It would explain a lot about the disjointed dialogue in this strip.

Ha ha! Crankshaft’s an angry old man that nobody likes, and he’s about to be stung all over his face by bees! Oh, it doesn’t take much to warm the cockles of my black, black heart. 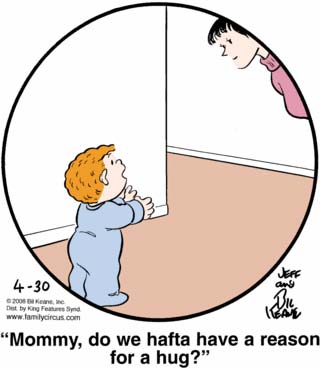 “Well, there has to be some reason. For starters, it would help if I liked you.”