Poor Hi! Sure, he hasn’t gotten more than a meager cost-of-living wage increase from that tightwad Froofram in years, but he’s gotten used to the lifestyle that his realtor wife’s huge commissions made possible during the go-go housing boom of the mid-naughts. Now that she hasn’t sold a house in months, Lois can only stare cross-armed at Hi’s $16 bottle of wine, knowing that it’s put a substantial dent in this month’s grocery budget. Only Sterno will help the Flagstons drink away their pain for the foreseeable future.

Poor Gloria! All she wanted to do was live out her lifelong fantasy of making it with a guy with no legs, but it turns out that hero Steve is not only damaged physically, but mentally as well. Sure, you can forgive a guy who had a mine planted outside of his hut and gets mysterious packages in the mail for being a little paranoid, but it’s clear that he’s going to see conspiracies in every nice gesture anyone does for him — and that he’s not ready for a relationship. Gloria will just have to console herself with her back issues of Stump Humper a little while longer. 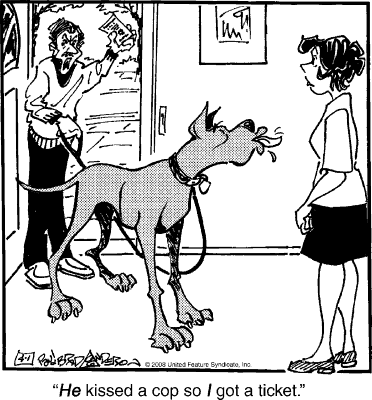 One of the fun things I like to do with the comics is to come up a whole hidden backstory behind the gag-a-day features. For instance, I like to imagine that Marmaduke’s owner is actually Adolph Hitler, who faked his suicide, escaped from his command bunker to post-war American suburbia, and got a Great Dane. His former position as absolute ruler of a continent makes the petty indignities of life with Marmaduke all the more infuriating. Today, for instance, we can see on his hate-twisted fate that he would like nothing more than to send the impertinent policeman and the damn dog to a concentration camp, but as it is all he can do is wave his hand in the air and rage impotently. Is it a fitting punishment for his monstrous crimes? Not really, but it’s kind of fun to see.

The “drama” of today’s strip — Gil sends hapless assistant to hush up overbearing parent, hapless assistant fails miserably — is lame even by Gil Thorp standards. Still, it’s always nice to see some Milford kids on the verge of tears.