Why do we tolerate Mark Trail’s inane dialog and nonsensical plots? For the brief and hilarious outbreaks of violence, of course, and today’s is a doozy. Mark kicking in the petnappers’ door so hard that it bends while apologizing (to the door, apparently) for his entrance not being as dramatic as he intended could be the greatest combination of vigilantism and almost-but-not-quite-idiomatic English since “You won’t be releasing any more birds!” Tomorrow we should could get some important questions answered, such as: Will Mark punch a woman? And are his fists powerful enough to separate a man from his ponytail?

Today’s action is made especially hilarious by Mark’s reedy, pipe-cleaner like legs and tiny feet. It appears that the terrible limb-wasting disease that has already ravaged Rusty is beginning to spread throughout the Trails’ Lost Forest compound. 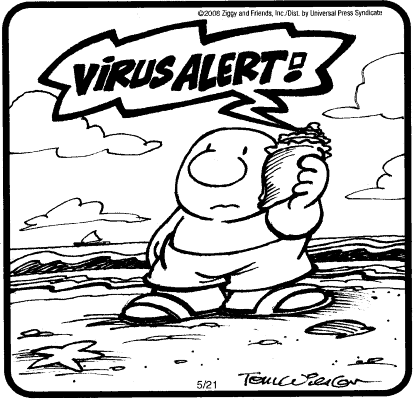 Oh, yes, ha ha, it was all very funny when Ziggy got e-mail from his toilet, but today we see that this was only part of a larger crisis in the Ziggyverse. Apparently our hapless gnome-like protagonist is beginning to notice the computerized functionality that lies behind all the seemingly ordinary aspects of his world — and it’s all beginning to go awry. This can only mean one thing: The Matrix has finally come to the top of the Netflix queue over at Ziggy central.

Also, if anyone can tell me why the normally pantsless Ziggy has decided that going to beach would be a good occasion for covering up his nether bits, I’d love to hear it. But if you have a theory as to where his nipples went, you can just keep it yourself.

So, Legless Steve spent weeks brooding about possible terrorist threats to his life, only to see them neutralized in about thirty seconds by his feisty, miniskirted legal secretary. Meanwhile, Abbey spent longer than it even bears thinking about harboring suspicions about her neighbors, even engaging in some cut-rate derring-do to spy on them, only to have them found out and apprehended off-screen, by someone else. Judge Parker seems determined to challenge Spider-Man in the Least Satisfying Dramatic Tension Resolution Olympics.

No, “incited” isn’t an adorable malapropism. There’s an angry, torch-wielding mob just off-panel. You’re lucky you can’t read, Merrie; it sure wouldn’t be “just another book” to you then.

Oh, General Halftrack! Your tales of your emotionally crushing marriage are amusing and all, but you and I both know that you’re just hung over. Or possibly still drunk.