Before we launch into our comments of the week, I have some charming photos for of Comics Curmudgeon merch being worn overseas! Faithful reader Mooncattie (himself from Canada, which sort of counts as overseas, if you consider Lake Ontario to be a “sea”) journeyed to Germany with Comics Curmudgeon t-shirts in tow! Check it out: 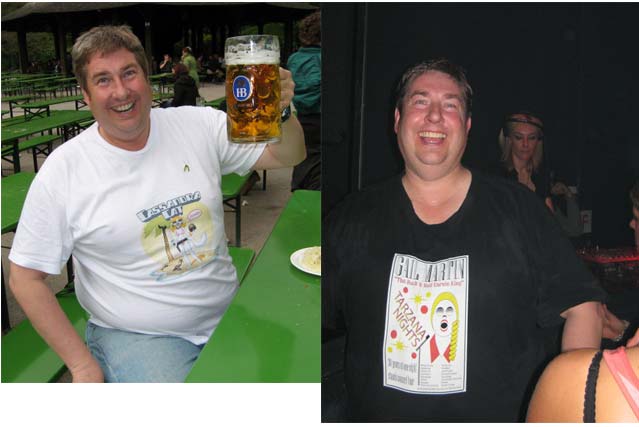 “The Gail Martin shirt photo was taken at a LOUD Berlin dance party about 3 a.m.,” Mooncattie reports. “In the background on the decks is legendary Berlin techno queen Marusha. The photo of me in my Cassandra Cat shirt offering a toast to all Curmudgeons comes from the Chinese Tower beer garden in Munich!”

Back here in America, it’s once again time for this week’s top comment:

“Oh, look at Mark’s face in the last panel. This stupid, pointless plan is tearing him up inside. ‘I told myself I would not cry, fellow, and yet there is evidence of it on my cheeks! Please do not tell Rusty, if you ever see him again, which you probably will not.'” –Vakar

“Crime-fighting and the flu don’t mix? Tell that to Vomit Man!” –Beatrice

“I kept trying to figure out who Rick and Ron reminded me of until it finally hit: my testicles after a long, hot bath.” –Dingo

“‘I am Samira, daughter of Abul Hakim! And you are Steven Shannon … murderer of my father!’ ‘Okay, now that we’ve finished with the introductions, why don’t we go around the room and everyone find something nice to say about each other. Steven? Why don’t you go first.’ ‘Um, I like your wrist watch, Samira. Is that from Zales?'” –gh

“Well, this is nice, but I was kind of hoping Steve’s mom had keeled over in her wheelchair. Against a dramatic background highlighting the spartan furnishings of their home, Gloria would rush to comfort Steve as he collapsed against the overturned wheelchair. Pushing aside Grandma’s spindly, misshapen legs, Gloria would pin Steve’s hands at his sides with her muscular thighs and bear down on his chest with her even more massive chest until they both collapsed amid a tangle of thrashing limbs. Finally, his will and resolve in tatters, Steve would against-all-odds lurch to his feet, creakily at first and then with more conviction, gather Gloria in his arms, step over the lifeless body of his mother, and carry Gloria upstairs to the ravishing she so clearly has been angling for. But a terrorist is OK, too.” –trey le parc

“Throughout the years I’ve given to reading Ziggy, I’ve never really expected a payoff. I just considered it one of those acts of mild daily masochism to which we are all so prone. I was clearly mistaken, in that today’s installment is, at the risk of sounding hyperbolic, roughly the single awesomest thing ever. It’s unfortunate, but probably not coincidental, that the point at which Ziggy’s author has finally grasped the concept of making an actual funny joke is also the point at which he appears to have reached the apex of irreversible suicidal depression.” –Violet

“Frankly, I wanted more sibling fistfights in the intensive care unit before they finally made up and their mom woke up from her coma. Way to raise QUITTERS, Mrs. Amalfi!” –Trilobite

“And say what you will about Samira (‘Racial stereotype.’ ‘Elektra Complex.’ ‘You’re soaking in it now!’), she’s got a good heart. Sure, she’s gagged Granny, duct-taped her to her wheelchair, and wired her with enough explosives to take out a city block or two — but at least she’s put her shawl back over her bony old shoulders. I mean, the woman’s a hundred and three! Just because she’s terrified, unable to breathe, and festering in a pool of her own feces, she shouldn’t have to catch a chill.” –boojum

“What’s especially upsetting here is that Alan’s mouth is open, but in his reflection it’s not. Is it possible that his drug binges have in fact severed his psyche from his body, creating two distinct beings who will argue with each other about the location of their ‘dope’ which they will then smoke from their ‘pipe?’ Or perhaps some kind of Patty Duke Show hilarity will ensue. Either way, it promises to be boring.” –Nate

“I think when Alan is referring to his ‘bag of dope,’ he’s actually talking about Lu Ann.” –Calico

“I like how panel 2 of Spider-Man is just Vulture rewording what he said in panel 1. He was planning on saying, ‘Should you have any items on your person that other people might willingly pay money to possess, hold it in your hand over my bag and let go. The force of gravity will do the rest,’ but instead he got tackled by a cop.” –Raznor

“Wow, I guess the Philadelphia Eagles mascot has fallen on hard times.” –Jnoble

“Gee, Lois. How hard is it to be a poet? It doesn’t take a lot of time to write a poem. There once was a man named Hi/ A corporate tool of a guy/ He met a young poet/ And before you know it/ They were married and living a lie. That took, like, two minutes.” –Mac

“What struck me first about Lois’s Past of Unfulfilled Dreams is that at each stage — from princess, to punk rocker, to poet, to corporate sell-out — she never once changed her hairstyle. Perhaps she knew deep down that each phase of these ambitions were really just a lie she was telling herself as she prepared for a life of domestic drudgery. Her hair was a way for her to ‘keep it real, yo.'” –Kevin Moore

“Lois finally admits that she never really wanted to be a mother; she just sucked at everything else.” –cheech wizard

Also! Thanks once again to all of you who donated cash to me in my tip jar. Blessed souls, every one! Similarly blessed are our advertisers: