If I’m remembering correctly, the Tragically Ironic Hearing Loss storyline that led to Harry Dinkle’s retirement took place before the decade-long timejump. Since his constant mopey presence around the house has been driving his wife up the wall since day one, she’s no doubt well and truly insane by now. This may explain why she’s harassing a school board official about her personal problems, or why she feels a need to refer to her husband by his full name, including middle initial, in casual conversation. As Harriet’s already admitted that she’s crazy, I hope the school board president is desperately pressing the panic button under his desk, before she turns violent.

We all know that Mark Trail only cares about humans to the extent that they threaten wildlife habitat or get punched by Mark, but even by the standards of this strip the handling of little Madeline’s “condition” is shockingly bonkers. Has anyone involved in the production of this strip encountered the modern medical system in any way, shape, or form? What the hell kind of doctor looks at a comatose little girl, scratches his chin thoughtfully, and then writes PUPPY half-legibly on his prescription pad? The kind that gets generous kickbacks from the American Kennel Club, that’s what kind.

Some clever Photoshopper needs to change the dialog in this strip so that Elmo and his towheaded little friend are simply demanding money from Dagwood and threatening to beat his legs with that baseball bat if he doesn’t comply. It would explain his typical but still odd lope in the third panel. 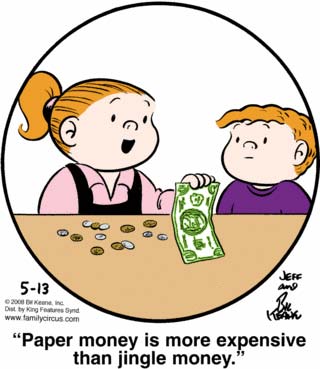 “But then, most paper money has been up people’s noses, so it’s kind of a mixed bag.”