I was going to make some snide comment about how sad it is that Herb and Jamaal thinks it’s keeping its readership enthralled by this cut-rate David-and-Maddie-style romantic tension plot, but then I realized that I keep commenting on it, so who’s the sad one, really? Anyway, today’s installment takes the strip’s usual nonspecific circumlocution to some kind of higher art form. Are these two even aware that they’re talking about each other any more? Is Jamaal !ing in the final panel because he’s trying to visualize what Yolanda means by his “hammer” and her “bent nail”?

Speaking of tedious romantic storylines, with TJ safely bundled off to … wherever he goes to when he’s not in the strip (*cough* gay bar *cough*), will tonight finally be the night when Brad “mixes some Brad” with Toni’s “Toni”? I have no real idea what that sentence I just wrote means, but it sounds gross, so I hope not.

Speaking of tedious romantic storylines, I have to admit that today’s FBOFW made me crack up. Sure, it’s a reinforcement of the horribly retrograde idea that the strip’s been going on about for some time — that if some guy you don’t like is coming on to you, all you can do is wring your hands and whine weakly about it unless you have a bit of finger hardware purchased for you by someone else with external genitalia. But the sight of Warren recoiling in horror from the second-cheapest ring from Zales (or its Canadian equivalent) as if it were filled with deadly radon gas is so hilariously over the top that Foob, Inc., has to be in on the joke. Right? Right? Right?

In happier news, Donna Amalfi celebrated Mother’s Day by dropping dead. Since this blessed event took place at the beginning of the week, we should be treated to five or six glorious days of Mary helping the Brothers R process their emotional pain before giving this whole thing up as a bad job and blessedly moving on to something equally dumb. 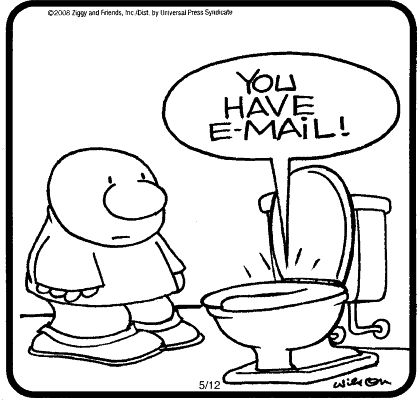