So, last night I had put up my little Luann-Schlieffen Plan joke and was feeling kind of proud of it, when my wife came in to read the post and said, “I can’t believe you didn’t say anything about the second panel!” To be honest, my eyes had mostly just skimmed over the text of Luann’s mom’s diatribe once I felt I had the gist, but since my wife is in the sex ed biz, her more discerning eye couldn’t help but settle on the gem highlighted here: 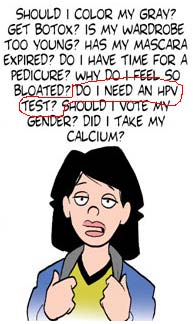 HPV, if you don’t know, is one of the most common sexually transmitted infections. Since the DeGroots have been married for 20+ years, this worry on her part has serious implications for her fidelity, her ideas about his fidelity, or the possibility that they’re totally free and freaky swingers (I knew that something racy was going on at Kamp Kouple.)

Anyway, my wife posited that this was originally written to have her wondering about whether she should get the new HPV vaccine for Luann, and that the syndicate then rejected this as too controversial. I replied that based on Luann’s track record, we don’t have to worry about her having sexual contact with anyone anywhere anytime soon.

The strip concludes with Mrs. DeGroot kissing her husband good-bye and heading off for her mammogram, leaving the baffled Mr. DeGroot to thank God that he was born a man. Because men don’t get venereal diseases or need preventative medical care!

UPDATE: Yes, as several people have pointed out, HPV can be latent and asymptomatic for a long time; thus, Mrs. (or Mr.) DeG could have been infected in the course of their premarital sexcapades. This of course implies that they’ve had premarital sexcapades with other people, which is a sort of groundbreaking thing for the forever-arrested-in-1955 sexual morality of the comics, and makes it all the sadder that they seem grimly determined to keep their twentysomething son virginal (not that he needs much help.)

Also, it’s important to note that Mrs. DeG is obviously wearing Captain Kirk’s uniform, which she probably picked up off the floor in the aftermath of their space-quickie. And if there’s one person you’re likely to catch an STD from, it’s Captain Kirk, space-whore.