Well well well, look who’s turned out to be the Mudlarks’ chief nativist! It’s Andrew Gregory, who, I feel obliged to point out, wasn’t such a law-and-order type back when he had a half-drunk Marty Moon pretending to be his father for the benefit of a state social worker. Did Marty’s attempt to teach him the importance of sticking it to the man come to naught? I guess in the A-Train’s hierarchy of faceless, dysfunctional government bureaucracies, U.S. Immigration and Customs Enforcement gets an “honor and obey”, while Social Services rates a “go ahead and mess around with.”

I’m hoping that Marty, flush with his victory in the battle to help underaged Andrew half-competently raise his young siblings without interference from the government, decides to take on Homeland Security for Elmer’s sake. I’m imagining him wearing a huge sombrero and a poncho and spouting quasi-Spanish gibberish like “No es bueno!” and “No mas!” and “Hasta la vista, baby!” It won’t help Elmer at all, of course, but it’ll be hilarious. 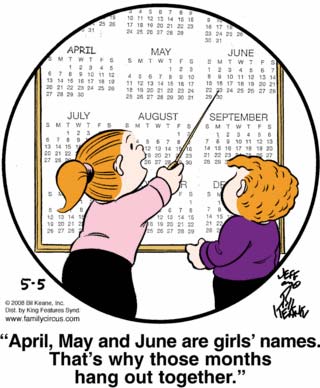 Wow, the Keane Kompound has the most boring wall calendar ever. I guess when your strict religious beliefs regard any depiction of humans, animals, or plants as sin against the Creator, all you’ve got do to entertain yourself is make up sad little stories about the names of the months.

I also question the wisdom of giving a long, pointy stick to a six-year-old, or however old Dolly is supposed to be. At least she’ll probably use it against others, not herself; if Jeffy were wielding it, it’d be buried in his eye in no time. 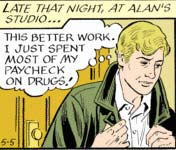 For reasons that I can’t quite verbalize, and hopefully don’t have to, Alan’s thought-balloon whinge in today’s Apartment 3-G was hands-down the funniest thing in the comics section today.