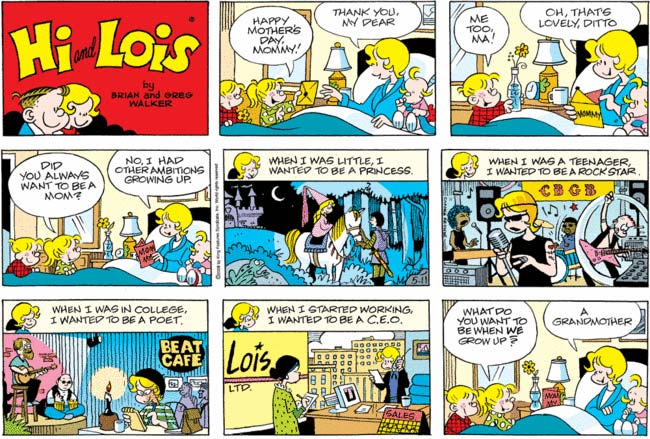 Yes, happy mother’s day, Lois! I’m glad to see that you’re spending it crushing any ambitions your girl-children might hold of having kids and having some other identity for themselves when they grow up. After all, everyone knows that nobody could possibly be a princess, rock star, poet, or CEO while also being a mother. Why, that’s pure madness, I tell you, pure madness!

I do have to give Lois points for having rock star fantasies that involve a gig at CBGB — and since she’s probably in the 40-45 range, this is even vaguely appropriate, chronologically. The beatnik poet look, not so much. I’m also curious as to where Chip is during this celebration. Because he’s an aspiring musician himself, it may be too painful for him to hear once again how her band had to break up after she got knocked up with him by some corporate tool she met one night after a show. 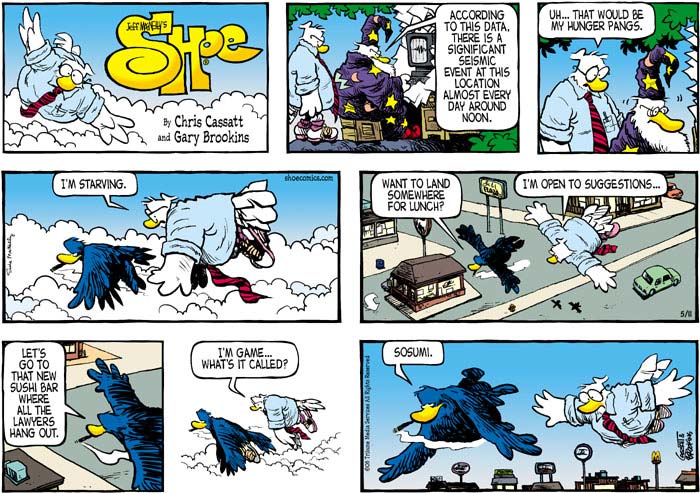 HOLY CRAP THEY’RE FLYING! I complain a lot that the bird-ness of the birds in Shoe is not exploited often enough, so it’s somewhat gratifying to see Shoe and the Perfesser swooping through the sky in living color. But since all the offices and homes and restaurants we see the Shoe characters hanging out in are on tree branches, it makes the sprawly suburban landscape that they’re navigating over somewhat disconcerting. I’d like to see them walk into one of the strip malls below them and order lunch, only to be met with uncomprehending stares and/or shrieks of terror.

Another strange anomaly thrown into sharp relief in the air: the Perfesser wears clothes — a shirt and shoes, at least — while Shoe is naked as whatever kind of bird he’s supposed to be. This brings a whole new level of discomfort to his drunken advances on barflies that we’re occasionally forced to endure.