It took me a while to figure out exactly what the storyline was in today’s Six Differences — dog mauls little girl to seize her ice cream, little girl weeps for the loss of the treat that she’d been looking forward to all day, little boy laughs sadistically at her pain, squirrel is horrified by the quotidian cruelties that selfish humans and animals visit upon each other, bird lands on dog’s head and stares at the viewer with huge, soulless eyes. At first I didn’t make the connection between the fallen ice cream cone and the brown goo in the dog’s mouth, and just assumed that the mutt was eating his own feces; while I realize that this is more or less a daily event in kennels and dog parks all across this great nation of ours, I was shocked to see it in a family newspaper.

But then again, today’s Ballard Street is about a dog licking his own ass, so perhaps I shouldn’t be surprised by anything anymore. 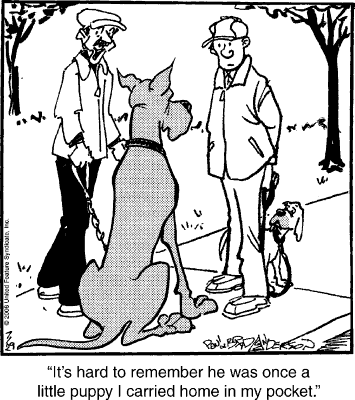 This may be the first time I’ve used the phrase “I like” in relation to Marmaduke, but: I like the way the other dog is hiding behind his owner in today’s Marmaduke. It really helps emphasize the unspoken conclusion to Marmaduke’s owner’s sentence, which is “… considering the enormous, murderous hellbeast he’s become today! OH MY GOD DON’T MAKE EYE CONTACT WITH HIM NO NO NO”

In non-dog news, Sam Driver recently discovered that just touching this little red book has magically improved his golf game, in a sequence that involved Abbey wearing ludicrously short shorts but also involved Sam shooting golf balls at a driving range — possibly the most boring thing I can imagine — so I couldn’t bring myself to comment on it. Today, though, I’m intrigued by the fact that Sam has scored one of those bulkhead seats at the front of coach — you know, the ones that have twenty feet of open space in front of them. That’s just one of the benefits of flying Teal Seat Airlines! Another benefit: stewardess ass crack.